Police: As many as 20 present at gang rape outside school dance 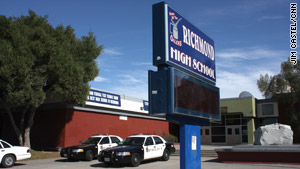 Police say a student at Richmond High School was gang raped outside during a homecoming dance.

Richmond, California (CNN) -- Investigators say as many as 20 people were involved in or stood and watched the gang rape of a 15-year-old girl outside a California high school homecoming dance Saturday night.

Police posted a $20,000 reward Tuesday for anyone who comes to them with information that helps arrest and convict those involved in what authorities describe as a 2½-hour assault on the Richmond High School campus in suburban San Francisco.

Two teenage suspects have been jailed, but more arrests, as many as 20 total, are expected, according to a police detective.

"We will be making arrests continually as we develop probable cause," said Richmond Police Lt. Mark Gagan. "With this number of people implicated in the incident we're going to be making arrests on an ongoing basis."

As many as 10 people were involved in the assault in a dimly lighted back alley at the school, while another 10 people watched without calling 911 to report it, police said.

A 1999 California law makes it illegal not to report a witnessed crime against a child, but the law applies only to children 14 and under.

"We do not have the ability to arrest people who witnessed the crime and did nothing," Gagan said. "The law can be very rigid. We don't have the authority to make an arrest."

Charles Ramsey, a member of the Richmond school board, said the school district bears some responsibility for the attack. School administrators and police apparently weren't watching the area as they should have, Ramsey said.

The school said it would hold a safety meeting for parents and students Wednesday evening to address the assault.

The victim was found unconscious under a bench shortly before midnight Saturday, after police received a call from someone in the area who had overheard people at the assault scene "reminiscing about the incident," Richmond Police Lt. Mark Gagan said.

The girl was flown by helicopter to a hospital where she was admitted in critical condition. She was in stable condition Tuesday, police said.

"There is one individual in custody who has made some spontaneous statements that have led me to believe that he is culpable for what happened," Richmond police Lt. Johan Simon said.

Nineteen-year-old Manuel Ortega, described as a former student at the school, was arrested soon after he fled the scene and will face charges of rape, robbery and kidnapping, police said.

A 15-year-old was later arrested and charged with one count of felony sexual assault. A third teenager was being interviewed, Gagan said.

"Based on witness statements and suspect statements, and also physical evidence, we know that she was raped by at least four suspects committing multiple sex acts," Gagan said.

"As people announced over time that this was going on, more people came to see, and some actually participated," Gagan said.

The attack occurred on school grounds as the annual homecoming dance was under way inside the school Saturday night, authorities said.