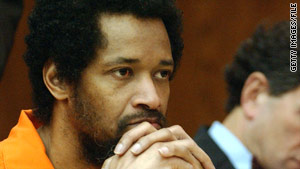 "Inmate John Muhammad was offered a choice in method of execution, and he declined," Larry Traylor said. "Under the code, if the inmate declines to choose, it defaults to lethal injection."

Muhammad was convicted of killing Dean Harold Meyers, one of several victims in a series of sniper-style shootings that terrorized the Washington area in October 2002.

During a three-week period, Muhammad and his young protege, Lee Boyd Malvo, shot 13 people, killing 10 of them, police said. The two also are suspected in other shootings, including in Tacoma, Washington; Montgomery, Alabama; and elsewhere in the Washington metro area.

Attorneys for Muhammad argued last week that he should be given clemency on the grounds that he has a severe mental illness that worsened while he served in the Persian Gulf War.

Attorney Jonathan Sheldon said he and other attorneys presented Virginia Gov. Tim Kaine's representatives with audio interviews with attorneys, mental health experts and witnesses rather than a written document. They said they plan to file an appeal with the U.S. Supreme Court on November 3.

Kaine's office said that any information on the clemency request would come in the form of a news release at a later date.