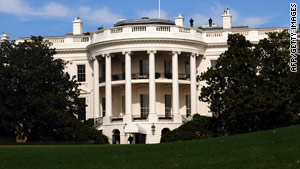 Elke Kennedy will be in Washington on Wednesday to witness the signing of the hate crimes bill.
STORY HIGHLIGHTS
RELATED TOPICS

(CNN) -- For Elke Kennedy, the significance of Wednesday's hate crimes legislation can be traced to a single punch outside a bar on a drunken night two years ago.

"My son was murdered as he was leaving a bar in Greenville, South Carolina," the 48-year-old woman told CNN about her son, Sean, who was 20 when he came face-to-face with what she calls a hate crime. "He walked outside the bar and there was three people sitting in a car outside and they called him over to ask him for a cigarette."

"As he was walking away, the guy in the back seat got out and walked over to Sean and called him a faggot and punched him in the face."

The men got back into their car and drove off, leaving Sean on the ground, his brain separated from his brain stem, she said.

Fifteen minutes later, the 18-year-old assailant called one of the women whom Sean had been with in the bar and left a message on her cell phone.

"You tell your faggot friend when he wakes up he owes me 500 dollars for my broken hand," the message said.

Sean was taken to Greenville Memorial Hospital, where he was pronounced brain dead 17 hours later. More than 700 people showed up at his memorial service at Crossroads Community Church in nearby Simpsonville.

He bargained it down to involuntary manslaughter and served 199 days in the county lockup followed by 12 months in prison, Kennedy said. Moller was released on probation last July, she said.

An attempt to reach the Moller family Tuesday was not successful.

Had hate crimes been a federal offense in 2007, the FBI would have been able to investigate the attack, and Sean Kennedy's killer might still be in prison, his mother said.

This is a huge milestone, but it is not the end of the fight.
--Elke Kennedy, whose son was killed after leaving bar

For the past 27 months, Kennedy has logged 76,000 miles speaking at colleges and clubs across the country trying to raise awareness and gather support for the legislation.

Last week, the Senate did what she was seeking when it passed legislation by 68-29 that would make it a federal crime to assault an individual because of his or her sexual orientation or gender identity.

Obama is to sign the measure, which was added to a $680 billion defense authorization bill, on Wednesday. Kennedy and her husband were driving Tuesday night from their home in Greenville to the nation's capital, where they were planning to witness the ceremony.

"We are going there representing so many people," she said. "People who have been murdered and are dealing with the harassment and bullying and violence on a daily basis."

But Kennedy said her work does not end with the president's signature.

"This is a huge milestone, but it is not the end of the fight," she said. "We have to change the hearts and minds."

Toward that end, she has spoken at 34 colleges and universities "to educate these kids about what hate and violence and bullying can do and give them options and teach them non-violent conflict resolution."

The measure is named for Matthew Shepard, a gay Wyoming teenager who died after being kidnapped and severely beaten in October 1998, and James Byrd Jr., an African-American man dragged to his death in Texas the same year.

Several religious groups have expressed concern that a hate-crimes law could be used to criminalize conservative speech relating to subjects such as abortion or homosexuality.

But Attorney General Eric Holder has said that any federal hate-crimes law would be used only to prosecute violent acts based on bias, as opposed to the prosecution of speech based on controversial racial or religious beliefs.

Former President George W. Bush had threatened to veto a similar measure. Opponents of the expanded hate crimes bill challenged the need to specify one particular community in federal legislation. They contended that existing federal hate-crimes laws were sufficient to protect the rights of people based on sexual orientation and gender identity.

More than 77,000 hate crime incidents were reported by the FBI between 1998 and 2007, or "nearly one hate crime for every hour of every day over the span of a decade," Holder told the Senate Judiciary Committee in June.