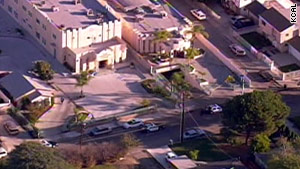 The two men, who have not been identified, are in stable condition at separate hospitals, said Deputy Chief Michel Moore of the Los Angeles Police Department.

Authorities took a juvenile into custody whose clothing matches "a loose description" of what the suspect was wearing, police said. He was released later Thursday pending further investigation. Police said he was cooperative with authorities.

"We have eliminated no one and that includes the teenager who was detained," said Lt. Alan Hamilton. "He was basically released to school because he is a juvenile and cannot be detained for more than six hours. But we are not actively investigating him as a suspect in this shooting case at this time."

Police have put extra patrols near local schools and other synagogues as a precaution, he said.

"We are looking into every possible motive," Los Angeles Mayor Antonio Ramon Villaraigosa said. "But at this point, all we know is that it was a random act of violence."

Moore said the two victims, ages 38 and 53, arrived at the synagogue's parking garage in separate vehicles. As they were parking, he said, a man in a black sweatshirt approached, pulled out a handgun and fired on the first victim.

The shooter then fired on the second victim and fled, Moore said.

"We don't know whether this was a robbery or whether it was an attack on these two individuals because of their presence at this synagogue," Moore said.

He said he believed that the two victims were arriving at the synagogue for morning prayers.

Authorities are reviewing security video from the synagogue, he said.