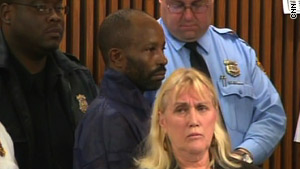 Cleveland, Ohio (CNN) -- The smell permeated the neighborhood, turning the stomachs of residents and curtailing their outdoor activities.

"We used to think that it was coming from out of Ray's Sausage," said one resident. "But you smell these smells, and I live right there and ... we used to come out here and oh, these smells would just be horrible."

Ray's Sausage Co. replaced a sewer line and grease traps, trying to rid the area of the stench. But Ray's wasn't to blame after all. Instead, police said, the foul odor had a much more sinister source.

Eleven victims have been found inside and outside a home adjacent to Ray's -- six inside and five outside. A skull, wrapped in a paper bag and stuffed into a bucket in the basement, apparently is all that remains of one of the 11 victims, authorities said Wednesday.

The home's inhabitant, Anthony Sowell, 50, is a registered sex offender. Now, Sowell is facing five counts of aggravated murder, rape, felonious assault and kidnapping, police said. A judge on Wednesday denied bond for him, saying the latest allegations against him are "gruesome" and the "most serious" he has heard in his years on the bench.

Seven of the victims died from strangulation by a ligature, said Frank Miller, Cuyahoga County coroner. A ligature can include a string, cord or wire. All of the seven still had something tied around their necks, Miller told reporters.

An eighth victim died from manual strangulation -- strangulation by hands. Two other bodies were too badly decomposed to determine the cause of death, although Miller said he believes they were victims of "homicidal violence." Autopsy results on the 11th victim are pending.

"It's most likely strangulation in all cases," Miller said.

The first victim was identified Wednesday as Tonia Carmichael, who was 52 when she was last seen on November 10, 2008, police said in a statement. Carmichael was identified using DNA. She disappeared from Warrensville Heights, a Cleveland suburb near Sowell's home, and her vehicle was found in Cleveland.

In the missing persons report, obtained by CNN, Carmichael's mother, Barbara, told police her daughter was addicted to crack and had previously disappeared for several days at a time. But she said she believed something had happened to her because she had not picked up two paychecks.

"This is what I've been saying since Monday, when, you know, we were called to the coroner's office and since this story broke, we automatically knew that this was going to be here," Danita Carmichael said.

Asked how her grandmother was holding up, she said, "As you can imagine, it's heartbreaking for the whole family, but this was her child. This was her daughter, her angel, her princess, and now we will never see her again. She's gone."

Danita Carmichael said she believed more victims may be found. "I think we are going to go as high as 15, 16 on this case because he had five years to do what he did before anybody thought about stopping him."

Some of the victims could have been missing for up to five years, Cleveland Police Chief Michael McGrath told reporters, and he doesn't believe authorities were able to discern any pattern relating to the disappearance of African-American women.

Police will execute a warrant later Wednesday for Sowell's DNA, to enter it into the known national DNA database, said the statement from Cleveland police Lt. Thomas Stacho.

McGrath said earlier authorities had no information about the smell in the area before the bodies were found.

Sowell showed no emotion during his hearing Wednesday before Municipal Judge Ronald Adrine. Asked whether he could afford a lawyer, Sowell responded quietly, "No sir."

Adrine, in turn, told the suspect, "This is without question the most serious set of allegations I have faced. Given the gruesomeness of what's facing you ... you are being remanded without bond."

Kathleen Demetz, the public defender representing Sowell, asked that he undergo a psychiatric evaluation. She also said that Sowell, an ex-Marine, has a heart condition and wears a pacemaker.

Sowell has told authorities he had been collecting unemployment payments since being laid off from his job two years ago. It wasn't immediately known what that job was.

Stacho has said Sowell had been making his living as a "scrapper."

"He walks around and picks up scrap metal and takes it to junk yards to make a few pennies," he said.

Police said authorities in Coronado, California, also were checking to see if Sowell might be tied to a rape case there.

Investigators finished digging for more possible remains and evidence Wednesday outside Sowell's home. Detectives were not returning to the home Wednesday, Stacho said, but "will evaluate intelligence gathered from Dr. Miller's examination of the victims to determine what additional steps will be taken at the home before returning."

"I like to believe there is nothing else more there, but we will not know until we finish the search," said McGrath earlier. "It appears that this man had an insatiable appetite that he had to fill."

Police initially went to Sowell's home last Thursday to follow up on a rape accusation. A week earlier, neighbors reported seeing a naked woman fall from the second floor, but no charges were filed.

Neighbors called 911 after the October 20 incident, and emergency personnel -- but not police, initially -- were sent to the home, McGrath told reporters Tuesday. Firefighters later notified police, who responded to the hospital where the woman was taken, he said. She told officers that she was at the home and "partying," he said. "They were doing coke, drugs, getting high." The woman said she was on an upper balcony and fell off the roof while trying to pick up her keys. A man described as her boyfriend -- Sowell -- told police the same story.

"At any point, that gal could have said, 'Hey, wait a minute,' but she did not," McGrath said.

Sowell was arrested Saturday, two days after police discovered the first bodies inside and outside the home.

Sowell was charged with a 1989 rape, but pleaded guilty to two counts of attempted rape under a plea agreement, court records show. Police said he was imprisoned from 1990 to 2005. Since his release from prison he was listed as living at the Cleveland home where the bodies were found, McGrath said.

Authorities from the Cuyahoga County Sheriff's Office checked on Sowell regularly, with the most recent check coming on September 22 to confirm his address, McGrath said. They found no problems, he said.

Police began to get suspicious of Sowell about a month ago, after a woman accused him of rape and assault, said Stacho. Investigators obtained the warrants that set off the search after getting the "cooperation of the victim," he said.