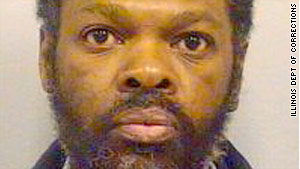 Students at Northwestern University's innocence project have been investigating the case of Anthony McKinney.

Editor's note: Nicole Lapin is an anchor and reporter based at the CNN Headquarters in Atlanta. She graduated from Northwestern University's Medill School of Journalism.

(CNN) -- It was two-and-a-half days before Illinois Gov. George Ryan was to leave office in 2003. I sat in a crowded auditorium in Northwestern University's Law School in Chicago, where Ryan was expected to make a major announcement on capital punishment.

"Half, if you will, of the nearly 300 capital cases in Illinois have been reversed for a new trial or for some re-sentencing." he said, his voice tired but clear.

Wrongful convictions had been all over the papers around that time -- the Anthony Porter case, the Ford Heights Four, Rolando Cruz.

"How in God's name does that happen? In America, how does it happen?" Ryan continued. "How many more cases of wrongful conviction have to occur before we can all agree that this system in Illinois is broken?"

On that day, the governor commuted the sentences of all death row inmates in the state and credited an unlikely source for helping him make his decision: Professor David Protess' undergraduate Investigative Journalism class at Northwestern University's Medill School.

In the previous decade, Medill students had uncovered some of the most high-profile wrongful convictions in the city. The class had worked to secure the release of 11 innocent prisoners, five of whom were scheduled to be executed.

As a wide-eyed journalism student at Northwestern, I remember feeling proud of my classmates, proud of my school and proud of the profession I was entering.

Today, six years later, Protess' class is far from the center of the same praise. Presented with evidence in a new case, the state attorney's office is questioning the motivations of the messenger -- the class itself.

The students have raised questions about the murder conviction of Anthony McKinney. In response, the state attorney's office issued a subpoena for the students' grades, grading criteria, expense reports, syllabi and e-mail messages -- mine included.

Find out more about the Medill Innocence Project

The year after Gov. Ryan's speech, I signed up for Protess' class. I was assigned to the team working on McKinney's case, who was convicted in 1978, when he was 18, for shooting a security guard in Harvey, Illinois.

On the night of September 15, 1978, a white security guard named Donald Lundahl was killed at close range by a shotgun blast while sitting in his car.

Later that evening, a police officer noticed McKinney, an African-American, running down the street. He was arrested.

McKinney had no violent criminal history and was not in possession of a weapon. He was briefly released after telling police he was watching the Muhammed Ali-Leon Spinx heavyweight championship fight when the murder took place and was running from "gang-bangers" when the officer saw him.

Authorities questioned another teenager, who told police that he saw the murder, claiming he saw McKinney, from 50 yards away, say, "Your money or your life," and shoot Lundahl.

McKinney was picked up again, and after a second lengthy interrogation, he signed a confession, typed by police. During his trial, he recanted the confession, and said it was coerced.

But based on officers' testimony and that of the teenager, McKinney was convicted of murder.

Prosecutors sought the death penalty, but because he had no record, McKinney was sentenced to life in prison. Had his sentence been death, McKinney would have been executed long before the commutation of death row cases in 2003. He would have been dead well before Protess even took up his case.

Since Protess started the course in 1992, his classes have investigated about 50 cases.

Although the ones that are chosen have major red flags, like lack of physical evidence, not all convictions are found to be unjustified.

Of the 50, 11 led to exonerations. Two indicated solid evidence of guilt. The rest are under review by the judiciary or were inconclusive, Protess said.

Protess made clear to all of his classes that the coursework was about pavement-hitting journalism, the process behind discovering the truth -- guilt or innocence. I went into the class to learn that process.

During the two quarters I took the course, I lived the McKinney case. My team and I spent nights and weekends doing things I never told my family or friends because they wouldn't believe me. Some times it was a matter of staking out a source's house or going to smoky, seedy bars to fish for information on the decades-old case.

Those times, a professional private investigator and another team member would be in the car listening for the words "winter wedding" -- the "safe word" we were supposed say into the cell phones in our pockets if something dangerous ever went down. (It never did.)

Unlike other Medill classes, this course was hands-on, gritty and raw. I gained more practical skills in those months than in all of my other college courses combined. The experience prepared me to do the work I have done professionally and will continue to do throughout my career.

In our investigation, we reenacted the crime scene and determined it was impossible to discern any words spoken or shouted from 50 yards away.

Later, we tracked down the then-teenage witness who said he saw McKinney that night. The man recanted his testimony on videotape, and told us police beat him.

We also found a fire department document that indicated the paramedics were called to the police station during McKinney's interrogation, raising the question of whether he was roughed up during his interrogation as he said he was.

We interviewed the "gang-bangers" who chased him that night. They acknowledged they chased him after the Ali fight because they were angry he had damaged their car earlier.

Finally, we identified alternate suspects, one of whom stated on videotape that he was there when the murder was committed -- and that McKinney wasn't.

After I graduated, the investigation continued. Once Protess felt there was enough evidence, after nine teams of student reporters had worked on the case, the information was shared with the Center on Wrongful Convictions at Northwestern's Law School and McKinney's legal team.

The audio and videotaped interviews, affidavits and other on-the-record interview transcripts we worked on also were presented to the district attorney's office. Last year, the new evidence was submitted to the Cook County Circuit Court in an effort to exonerate McKinney.

A spokeswoman for the prosecutor's office, Sally Daly, told me that we, as students, were "conducting these interviews for a grade in this class."

She went on to say the "request for the grades goes to explore any possible bias, interest or motive."

The claim is that we, as students, were motivated to get witnesses to play into a preconceived thesis of innocence in order to get good grades. I think I speak for my fellow alums when I say this class was never about grades.

It has always been about searching for truth and justice for people whose cases didn't get due diligence from a bogged-down system. This was about journalism in its purest and most passionate form.

For years, the class has been a check on the work of police and other law enforcement officials. Protess has seen and dealt with his fair share of heat for more than a decade, but never anything like this attempt to investigate the investigator.

Northwestern is not complying with the request for documents. A court hearing on November 10 will decide if the subpoena will stand. While we were students at the time, we "took reporting to the Nth degree," as the dean of the school told The Chicago Tribune. We functioned as journalists and should be protected by reporter's privilege laws.

About 50 similar programs across the country are watching to see what precedent could be set if the state is entitled to these materials. Will programs like Northwestern's continue if the volunteers are worried about attorneys' fees to handle requests for documents?

Recently, Judge H. Lee Sarokin, the federal judge who famously freed Ruben "Hurricane" Carter on a murder conviction that proved to be unfounded, wrote in support of all former members of "Team McKinney." "If a reporter hopes to win a Pulitzer or an investigator for the defense hopes to obtain further business," he wrote, "how can those motives possibly be relevant to the evidence obtained?"

The focus should be on the evidence, not grades. Student information is irrelevant to Anthony McKinney's case. Being forced to hand over private information will not only compromise the integrity of the program, but create a chilling effect on free speech and investigative reporting.

I recently went back and watched Gov. Ryan's speech on YouTube. I got the same chill I did watching it in person that day. I can only hope that a new generation of students has the opportunity to feel that, too.