No evidence wounded hit by friendly fire at Fort Hood 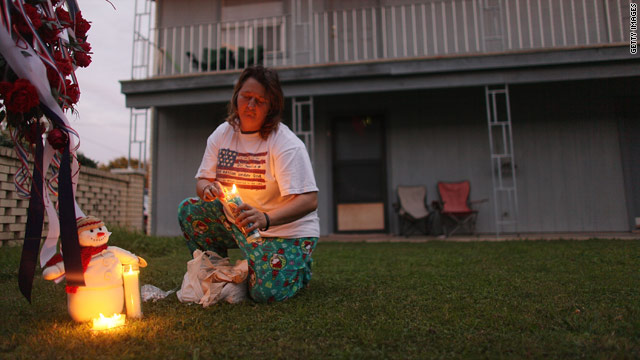 A neighbor of Maj. Nidal Malik Hasan, who did not want to be named, lights candles in the courtyard of their apartment complex.
STORY HIGHLIGHTS

A CNN Special Investigation drills down on the causes and the impact of the Fort Hood shootings, at 11 p.m. ET Saturday on CNN TV.

Fort Hood, Texas (CNN) -- There is no evidence of "friendly fire" during this week's deadly shooting at Fort Hood, an Army spokesman said Saturday.

Army Criminal Investigation Command spokesman Chris Grey said authorities did not believe that any of those killed or wounded were shot by anyone other than the suspect, Maj. Nidal Malik Hasan.

Furthermore, Grey reiterated that all evidence indicates that the suspect "acted alone." Grey said there was "no evidence to contradict that finding." He added that the investigation is continuing.

Thursday's mass shooting left 12 soldiers and one civilian dead and 42 people wounded, according to the post's public information office. It was unclear how many of those injured suffered bullet wounds.

By Saturday night, 17 people and the suspect, Maj. Nidal Malik Hasan, remained hospitalized, Col. John Rossi told reporters. All had suffered gunshot wounds, he said. Rossi said Hasan is no longer on a ventilator, but is still in intensive care at Brooke Army Medical Center.

Earlier Saturday, W. Roy Smythe, chief of surgery at Scott & White Memorial Hospital, said "a lot of progress has been made" in treating patients wounded in the rampage and that "some of them are out of the woods."

But Smythe, flanked by Texas Gov. Rick Perry and two state representatives, told reporters there is a possibility some patients will be "physically impaired" for life. And, he said, there's "no doubt many" will be "psychologically impaired the rest of their lives."

Video: Our thoughts are with the families

The incident has sparked national outrage. In his Saturday address, President Obama said it was "an act of violence that would have been heartbreaking had it occurred anyplace in America." But the president said, "it's all the more heartbreaking and all the more despicable because of the place where it occurred and the patriots who were its victims."

The White House said President Obama and the first lady will be attending a memorial service on Tuesday and the president ordered flags flying over the White House and other federal buildings to be lowered to half-staff until Veterans Day on Wednesday.

In Texas on Saturday, Smythe told reporters that of the 10 patients admitted to that hospital after the Thursday massacre, four have gone home and one may go home later Saturday. He said of the six originally in the surgical intensive care unit, only two remained there Saturday morning, with the others moved to a regular in-patient floor.

The people in the intensive care unit "are no longer on the ventilator and quite stable." Despite improvements, he said the injuries to some "are so severe that only time will tell how they'll do in the long run."

He said "some of these patients are young and sometimes young patients will surprise you in regards to their rehabilitation."

And at Carl R. Darnall Army Medical Center at Fort Hood, Jeri Chappelle, a representative of that facility, said eight patients are currently being treated there -- five in the hospital's intensive care unit and three others in a regular unit who are in fair condition.

Perry -- speaking outside the Scott & White hospital -- lauded the hospital's quality and professionalism and praised the patriotism of the soldiers.

"What I heard time after time in those hospital rooms that it's their honor to be able to serve our country, and that is a very humbling thing to watch a young man or woman whose life has been irreparably harmed in a violent act, yet their concern and their interest is in continuing to be able to serve this country," Perry said.

Also, he praised the first responders, and mentioned Fort Hood Police Sgt. Kimberly Munley, the civilian officer who confronted and disabled Hasan in a shootout.

Munley has drawn praise from the military and from citizens across the nations for her quick and bold actions.

Perry called her a "true professional" and a "selfless public servant."

"She's very understated," said Perry, who spoke with Munley on Friday. "A person who understands the gravity of what occurred, but also a classic public servant who is not interested in anything but getting on with her life and hopefully never having an event like this ever occur again."

Even as we saw the worst of human nature on full display, we also saw the best of America.
--President Obama

Citing other reports, Perry said, "this is not the first time that she's been called to action" and said "we all should be thankful that we have people like that in America."

Perry said he is in contact military and state law enforcement officials and that the Texas Rangers are helping federal officials in their probe. The governor also said the Department of State Health Services to send crisis counseling teams to the area. Share memories of victims

As for the investigation, Obama said he met with FBI Director Robert Mueller and representatives of other relevant agencies to discuss their probe.

"I'll continue to be in close contact with them as new information comes in," he said in his Saturday radio address.

Obama, a Democrat, and Perry, a Republican, both said that the situation brought out the best in people, citing the efforts of soldiers and civilians to aid others. "Even as we saw the worst of human nature on full display," the president said, "we also saw the best of America."