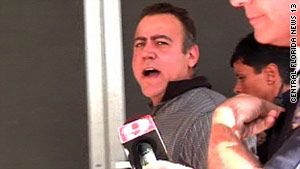 Jason Rodriguez, 40, was held without bond in an office shooting that killed one person and wounded five others.
STORY HIGHLIGHTS

Orlando, Florida (CNN) -- The man accused of killing one person and wounding five others in a shooting at an Orlando office where he once worked made his first appearance in court Saturday, and was ordered held without bond.

Jason Rodriguez, 40, said little more than his name during the two-minute proceeding.

Judge Walter Komanski said the court found probable cause and factual basis for Rodriguez' arrest and said he would be held without bond on a first-degree murder charge.

"He produced a handgun and started shooting in the reception area and continued shooting in the entire office area until he left," Lt. Louis Tanzi, violent crimes section commander for the Orlando Police Department, told reporters Friday.

According to the charging affidavit, the fatality occurred when Rodriguez entered the suite, pulled a handgun from a holster under his shirt and shot twice at an employee who was standing near the receptionist's desk.

He then entered a common work area "firing multiple rounds and causing injuries to several other employees," it says, citing a witness.

Video: 'It's not worth death'

During the incident, Rodriguez "was recognized by numerous former co-workers," it says.

He fled the scene and later surrendered to authorities at his home.

"I'm just going through a tough time right now, I'm sorry," Rodriguez, who had recently declared bankruptcy, allegedly told police as he was taken into custody.

Shooting suspect had filed for bankruptcy

Asked by a reporter why he allegedly committed the crime, Rodriguez, escorted by police, said, "They left me to rot."

Paraded in front of reporters outside the police station, he said, "Innocent."

Tanzi said other employees of the architectural and engineering firm where the attack occurred have described Rodriguez as a "disgruntled former employee."

A company spokesman said Rodriguez had been let go from the company two years ago for "performance issues."

Ken Jacobson, the chief financial officer and chief legal counsel for Reynolds Smith & Hills, said Rodriguez was hired as an "engineer one," which he described as a "beginning engineer."

"His work performance was pretty deficient from the start," he said.

"We tried to work with his performance for 11 months and when he didn't improve, we let him go in June of 2007."

The company hadn't heard from him since -- until Friday's outburst, he said. "So we can't make any sense of this."

The affidavit describes apparently conflicting reasons for his departure. Rodriguez told a detective he had resigned from the company after five years there to get a better job, it says. But it adds, "Rodriguez stated that people at RS&H, the Orlando Office, harassed him and threw him out for no reason at all, making it look like incompetency."

Tanzi said police recovered a firearm and had received "limited cooperation" from the suspect.

The five wounded victims are all in stable condition, he said.