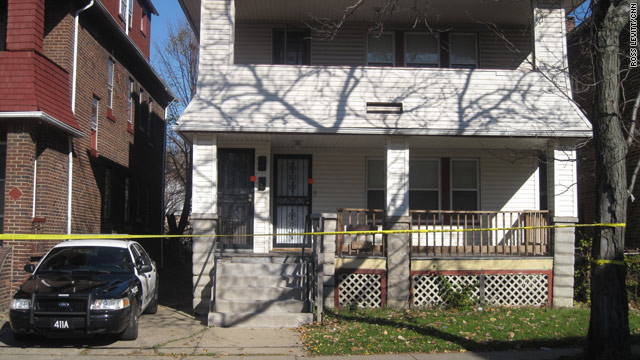 Cleveland, Ohio (CNN) -- Candles in hand and singing hymns, hundreds of Cleveland residents stunned by the discovery of 11 bodies in a local home gathered outside the house Sunday night to remember the victims.

But Inez Fortson, whose daughter Telacia was among the dead, said she could barely stand to look at the home.

"It's hard, because I want to burn it down," she said.

"I know my baby was in there, and she got killed in there," Fortson added. "I know what other people feel like when they lost a child. I didn't, but I do now. That was my only daughter."

Her body was among the first identified in the home of Anthony Sowell, who is now facing five counts of aggravated murder, rape, felonious assault and kidnapping in connection with the deaths. All of those found dead were African-American women.

A Cuyahoga County judge has set bail at $5 million for Sowell, a registered sex offender who served 15 years in prison for a 1989 attempted rape case. He was released from jail in 2005.

"Whenever I see him on TV or think about him, I have to pray," Fortson said. "Because I believe that one day, I'll have to forgive him for what he's done. But right now, I can't, because I'm numb."

About 500 people joined the march, which followed a packed memorial service at the neighborhood's Mount Olive Missionary Baptist Church. The turnout "means that people do care," Fortson said. "There is a little compassion in the world."

"It brings trembling to the bones to think about what all went on right here," he said.

Sowell has been placed on a suicide watch at the request of his attorney, according to Sowell's public defender Kathleen DeMetz. A psychiatric evaluation has been ordered but it's unlikely to happen until after the case goes before a grand jury, the next expected step in the case.

Police recovered the first bodies after they went to Sowell's home to follow up on a rape accusation. Last month, neighbors reported seeing a naked woman fall from the second floor, but no charges were filed.

Neighbors called 911 after the October 20 incident. Firefighters and paramedics responded, and later notified police. The woman told officers that she was at the home and "partying," when she fell off the roof.

Allen Sowell, the suspect's half-brother, told CNN he last saw his brother more than 20 years ago. Their stepmother, who lived in the house after Anthony Sowell got out of prison, said she knew of nothing odd going on at the time, Allen Sowell said.

The stepmother tried to get Anthony Sowell evicted from the house in 2007 because he wasn't paying rent, Allen Sowell said. Anthony Sowell said he shouldn't have to pay rent on a house that belonged to his father, who died in 2004, and remained in the house when his stepmother had to be hospitalized in 2007, his half-brother said.

Agents from the FBI's Behavioral Science Unit are assisting Cleveland police, Cleveland FBI spokesman Scott Wilson said. The agents are preparing a profile of Sowell for police, tracing his life and habits, and his DNA will be entered into a national database to see whether it can be linked to any unsolved crimes.

Allen Sowell said he was aware of his half-brother's prison record, but "just couldn't fathom" the accusations now facing him.

"I didn't think he was in that bad of a mental state," Allen Sowell said. "You never think it would happen to your family. It's a horrible feeling."

At 66, Allen Sowell is 16 years older than his half-brother, and the two didn't meet until Anthony Sowell was 9.

He added, "He deserves whatever he gets from the justice system."

CNN's Susan Candiotti and Ross Levitt contributed to this report.