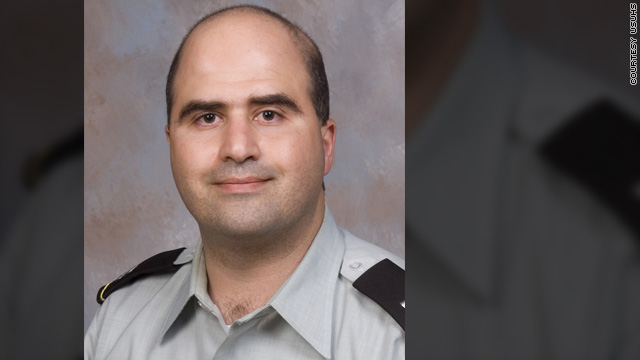 Fort Hood, Texas (CNN) -- People who knew and studied Maj. Nidal Hasan say he was a loner who had no luck finding a wife, and a criminal profiler said the Fort Hood shooting suspect fits the profile of a mass murderer better than that of a terrorist.

Investigators are searching for any missed "red flags" that might have prevented last week's fatal shooting, which left 12 soldiers and one civilian dead and 40 other people wounded. However, the FBI has said its investigations indicate the "alleged gunman acted alone and was not part of a broader terrorist plot."

"A lot of people are jumping to the conclusion because this man spouted violent Islamic ideology that this is a terrorist attack," criminologist Pat Brown said.

Brown, who profiles killers, said Hasan's profile is that of a loner.

"He was simply a lone guy who had issues, problems, psychopathic behaviors that escalated to the point where he wanted to get back at society, and he took it out on his workmates like most of them do," he said.

Video: Is Nidal Hasan a terrorist?

A cleric at the Dar al-Hijrah Islamic Center in Falls Church, Virginia, where Hasan attended when he lived in the area, said Hasan seemed to become "somewhat withdrawn" after the death of his mother in 2001.

"Some individuals said that their experience with him, that he changed after his mother passed away," Imam Johari Abdul-Malik said.

Another cleric there, Shaikh Shaker Elsayed, said efforts to find a wife for Hasan were unsuccessful.

"Well, we were not successful in matching him with somebody," he said.

Hasan, a 39-year-old psychiatrist, came under investigation last year when his communications with radical cleric Anwar al-Awlaki were intercepted by terrorism investigators who were monitoring al-Awlaki, a federal law enforcement official told CNN.

But an employee of the Defense Department's Criminal Investigative Services, assigned to the Joint Terrorism Task Force, decided to drop the investigation after reviewing the intercepted communications and Hasan's personnel files.

A senior Defense Department official said the task force's ground rules prevented that information from being transmitted outside the task force, although others disputed that.

"I find it hard to believe that they would just say, 'OK, we're not going to share any of this information with the military,' " HLN law enforcement analyst Mike Brooks said. "I mean, that's why you have a person from the military, from different military branches, on the task force to be the liaison."

Still, one source familiar with the investigation said Hasan's communications with al-Awlaki appeared innocent in nature.

Another federal source familiar with the investigation said Hasan's actions give no indication he was following the guidance in al Qaeda's terrorist handbook in the weeks before Thursday's attack.

That handbook directs jihadists to conceal their religion, mask their beliefs and blend in. Instead, Hasan frequently appeared in public in traditional Muslim clothing and prayed daily at the local mosque, making no attempt to hide his religion or conservative beliefs, the source said.

Hasan remained hospitalized Wednesday in stable condition and has not been formally charged with any of the 13 deaths in last week's shooting. His civilian attorney, retired Army Col. John Galligan, said he has spoken with his client, but that he was heavily sedated.

"I think the closest thing that indicates that there's a court-martial in the works is last night about 8 I did receive an e-mail from the prosecutor at Fort Hood indicating to me that the pass privileges and leave privileges of Maj. Hasan had been revoked," Galligan said.