Neighbor: Sowell said, 'It's all going to come out' after bodies found 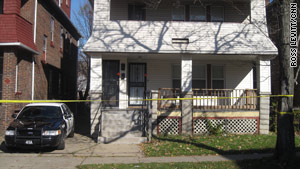 Cleveland, Ohio (CNN) -- Upon hearing that police had found two bodies at his home, murder suspect Anthony Sowell said, "It's all going to come out now," according to a neighbor.

Debbie Madison, 54, can see Sowell's house from her front porch. He moved into the Cleveland, Ohio, home in 2005 after serving 15 years in prison for an attempted rape conviction. But Madison said she never saw him until about two years ago.

Sowell kept up the place and mowed his grass, she said.

The two chatted across the street. Madison said she knew that Sowell's sister lived a few blocks away, because he waved at her once when she saw him at the sister's house.

"He seemed like he loved his sister," she said.

She did, however, smell the same foul stench described by others in the area. It was thought at the time that a nearby sausage factory was to blame. A more sinister explanation for the stench became apparent when police found the remains of 11 people, all African-American women, inside and outside Sowell's home. All that was found of one victim was a skull, wrapped in a paper bag and stuffed into a bucket in the basement.

Sowell, 50, a registered sex offender, is charged with five counts of aggravated murder, rape, felonious assault and kidnapping in connection with the deaths. He also was indicted earlier this week on charges stemming from an alleged rape in September, and his arraignment on those charges is set for Friday.

Madison said she will never forget the day a couple of weeks ago when police showed up and found the bodies while executing a search warrant as part of the investigation into the September rape allegations.

She said she got into her car and drove to Sowell's sister's house.

"I said, 'I'll take a chance and go over there and let them know something's going on at that house.' "

When she got there, Sowell was there, sitting on the couch, she said, "just like it was another day."

"I said, 'Tony, police are at your house and they're saying they found two bodies over there,' and he jumped up," she said.

"I said, 'I'll take you back to the police so you can talk with them.' He looked like he was gonna run."

But she said Sowell got into her car. She said she was nervous and asked one of Sowell's nephews to go along, but Sowell told his nephew to stay behind.

She said she did not ask him what girl he was talking about, but that the only girl she had seen at the house was Lori Frazier, the niece of Cleveland Mayor Frank Jackson. It was unclear if Sowell was referring to Frazier in his comments to Madison.

Jackson's office said earlier this week that Frazier had a relationship with Sowell that ended two years ago, but it was unclear whether the relationship was romantic.

Frazier told CNN affiliate WOIO that she had lived with Sowell and that "he took care of me, good care of me."

Neighbors and police have said that other women were also seen at Sowell's home from time to time, and that he would offer them beer and other alcohol. Police say he might also have offered them drugs.

Neighbors on October 20 reported seeing a naked woman fall from the second floor. Firefighters and police responded and later notified police. But the woman told officers she fell off the roof while she was at the home "partying," and no charges were filed. Another woman said she survived an attack by Sowell at the home.

Madison said when she and Sowell reached the corner near his house, he told her to take him back to his sister's. She did, and let him out.

"When he got out of the car and drove away, I screamed," Madison said, saying she believed that he "just admitted killing two people. ... I went home and my knees were shaking."

She said she accompanied police officers back to Sowell's sister's house, but did not see Sowell there then. Police arrested him a day and a half later, wandering within about a mile of his home.

"I guess it wasn't my time," Madison said of her encounter with Sowell that day. "He did nothing to me."

Sowell has been placed on a suicide watch at the request of his attorney, Kathleen DeMetz, his public defender. A psychiatric evaluation has been ordered but it's unlikely to happen until after the case goes before a grand jury, the next expected step.

"I hope he burns in hell," Madison said. "I'd like to to give him a Bible. At least he can try to save his soul."