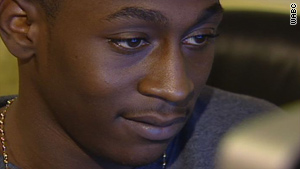 A simple Facebook status update turned into much more for Rodney Bradford: an alibi after he was accused of a crime.

New York (CNN) -- For 19-year-old Rodney Bradford, a simple Facebook status update turned into much more: a rock-solid alibi after he was accused of a crime.

Confirmation of the time stamp on the update and the location from which it was entered showed he could not have been at the scene of a robbery in another part of New York City. After he had spent almost two weeks in jail, the case against him was dismissed.

The story began at 11:49 a.m. on Saturday, October 17, when Bradford was updating his Facebook status at his father's home in Harlem. A minute later, 12 miles away in Brooklyn, two men were mugged at gunpoint.

The next day, Bradford, who is facing a separate 2008 robbery indictment, found out police were looking for him in connection with the Brooklyn robbery.

Bradford turned himself in, confident he would be cleared. But after one of the victims picked him out of a lineup, he was charged with robbery in the first degree and sent to Rikers Island, home of the New York City jail.

It wasn't until Rodney Bradford Sr. discovered his son's Facebook update that the young man's defense attorney realized he had an unbeatable alibi.

"Throughout that week," said the attorney, Robert Reuland, "I worked with the district attorney's office and made them aware of who our alibis were, presented the Facebook evidence and generally tried to convince them that it would be wrong to proceed to an indictment in light of this evidence."

The district attorney subpoenaed Facebook for documentation that would prove Bradford had updated his account from his father's home in Harlem. It worked.

"It all corroborated our alibis," explained Reuland. "The Facebook thing was really the icing on the cake. I think, ultimately, it's what prompted the DA to dismiss."

The district attorney's office would not comment on the story because the case is sealed.

Facebook officials said they are "pleased" they were "able to serve as a constructive part of the judicial process."

The online social network is ready to join telephone records and video cameras as a means of establishing an alibi -- but the implications are both good and bad, says an intellectual property attorney versed in the medium.

"We're in a much more trackable world, and for better and for worse," said attorney Jonathan Handel. "The extent to which it means that the right people get prosecuted and the innocent get their cases dropped, that's all of the good."

But, he said, the issue of privacy is also at stake.

And he pointed out that it could be argued the Facebook update was a set-up.

"On the Internet, nobody really knows it's you," he said. "A kid could set up an alibi by setting up a Facebook update."

"This is a 19-year-old kid. He's not a criminal genius setting up an elaborate alibi for himself," he said. "This is not the kind of thing someone would fake." And if someone were going to fake it, he said, "They'd do it in a lot clearer way" than the inside joke that Bradford posted: "On the phone with this fat chick... where my IHOP."

The message was met with some incomprehension by reporters first writing about the story, who didn't quite understand the reference to the International House of Pancakes.

Reuland explained it this way: The "fat chick" was a playful reference to Bradford's pregnant girlfriend who was irked that he, his father and his stepmother had gone to an IHOP without her the night before. The update teased that she wondered where her pancakes were.

"He was just kind of taunting her playfully about having been to IHOP," Reuland said. "I know it sounds not very nice but it's sort of a reference to her because she's pregnant. But they actually have a very good relationship. She's cute as a button."

Now that his innocence has been demonstrated, Bradford has hired civil attorney Herbert L. Schmell, who said they are "99.9 percent sure" that they will be filing a civil suit against the city.

"Based upon what I see, there was no probable cause to arrest him at the time," Schmell said. "And to put him in Rikers for 12 or 13 days. ... We're seeking money damages. He's shook up."