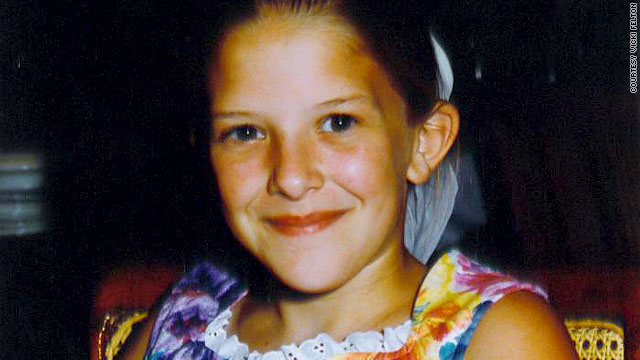 Leigh Occhi, 13, was home alone for less than an hour the day she disappeared.
STORY HIGHLIGHTS
RELATED TOPICS

New York (CNN) -- Leigh Occhi, 13 and ready to start the eighth grade, was still in her pajamas the morning of August 27, 1992, when her mother left their home in Tupelo, Mississippi, for work.

It was one of the last days of Leigh's summer break and mother and daughter had eaten breakfast together, reading the paper and talking about the coming school year.

Leigh planned to go to an open house at her new school that morning. She was waiting at home for her grandmother to pick her up. It was the first time she'd waited home alone.

As Vickie Felton left for work shortly before 8 a.m., bands of rain from Hurricane Andrew moved over Tupelo, and the Gulf Coast was under a hurricane alert. Worried, Felton called home. Nobody answered, so she hurried home after spending just a few minutes at the office.

Felton said that when she returned home, she found the garage door open, the light turned on. "That was very strange because the light doesn't turn on unless someone triggers the door," she said.

"I came in the house and there was blood on the side of the wall," Felton said. "I started calling for Leigh and going through all the rooms," she said. "Then I went into her bedroom."

"Her favorite blanket was crumbled up on the floor and I was very scared," she said. She ran into the backyard, checking the pool and the shed. There was no sign of Leigh.

Police said they received the first call at 8:30 a.m. from Felton and responded immediately. Leigh had been alone for less than hour, said Capt. Bart Aguirre, one of the original Tupelo police investigators assigned to the case.

"Vickie took us to Leigh's bedroom," Aguirre said. "There, we found a laundry basket that contained Leigh's nightgown that had blood stains all over it."

Blood and hair were stuck to a door frame and a small blood trail led from the hallway to the living room to the back door.

"It's a pretty significant amount that would lead any parent to concern," Aguirre said.

A team of bloodhounds and searchers canvassed the neighborhood, beginning in the yard and expanding outward to nearby ditches and fields.

"We covered a half-mile radius from the house that morning with the dogs and could not come up with anything," Aguirre said. "It was raining and it was storming and blowing pretty good. Had our dogs not had that bad weather to work in, they probably could have gotten on good scent."

Helicopters were added to the search once the storm passed. Still, there was no sign of Leigh. Investigators refocused their attention on the house, the only place where they had found evidence.

Aguirre said he searched the master bedroom down the hall from the bathroom. "I noticed there was a real light pink haze on the countertop," he said. The countertop later tested positive for the presence of blood, he said.

"It's pretty obvious to us that someone tried to clean up the scene or the countertop," Aguirre said. "But we couldn't find the rag or towel that had been used. We couldn't find it anywhere."

According to Felton, articles of Leigh's clothing were missing from the house, including a pair of shorts, a pair of shoes and a sleeping bag.

It's pretty obvious to us that someone tried to clean up the scene.
--Capt. Bart Aguirre

Detectives found no sign of forced entry, and the girl's mother and grandmother said she'd never open the door for a stranger.

At the time of her daughter's disappearance, Felton was separated from her second husband, Leigh's stepfather. Barney Yarborough had recently moved out of the family's ranch-style home. Leigh's father, still serving in the military, was living in Alexandria, Virginia.

The police investigation cleared both men of involvement in Leigh's disappearance.

Investigators asked Felton to submit to a polygraph examination. She agreed and failed it. "We let the FBI do another poly and they said they found deception," Aguirre said.

Felton said the first polygraph was administered within hours of her daughter's disappearance, and the others within a week or two.

"I couldn't tell you why," Felton said about the test results. "They measure changes in your body and when your daughter has gone missing and they strap you up to things, I can't imagine anyone's body not reacting."

She said detectives would not be doing their job if they didn't push her for answers.

"But, unfortunately," she said, "they wasted a lot of time with it."

Felton is not considered a suspect, and Aguirre said she has always been very cooperative.

About a month after Leigh's disappearance, the mystery deepened. A package arrived at Felton's doorstep, addressed to Yarborough.

"I called my husband and told him that he had gotten something in the mail," Felton said. "When he opened it, it was Leigh's glasses."

The package, which identified both the addressee and remitter as "B Yarborough," had been mailed from Booneville, Mississippi, approximately 30 miles north of Tupelo.

Tupelo officials sent the glasses and packaging to the FBI, which was already involved in Leigh's case. "We tried to get anything from the envelope, the packaging, and we didn't come up with anything," Aguirre said.

It was the last clue that investigators would get in Leigh's case.

Ultimately, Aguirre says, the lack of DNA evidence from a potential perpetrator in Leigh's home is what handicaps the investigation.

At the time she disappeared, Leigh had a slender build, bluish-green eyes and blond hair. She would be 30 years old.

An award up to $1,000 is offered by Crime Stoppers of Northeast Mississippi for information leading to an arrest in Leigh's case. An undisclosed reward is also offered by Leigh's mother.

Anyone with information concerning Leigh Occhi's disappearance is asked to call Crime Stoppers of Northeast Mississippi at 800 773-TIPS.