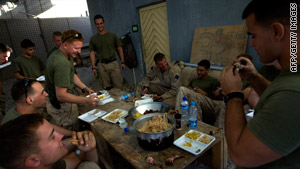 Atlanta, Georgia (CNN) -- A Kuwaiti company that has been paid more than $8.5 billion to supply food and other items to the U.S. military in the Middle East has been indicted on multiple federal fraud charges, authorities announced Monday.

The company obtained contracts in May 2003, February 2005 and July 2005 to feed U.S. troops in Iraq, Kuwait and Jordan, said the U.S. attorney's office for the Northern District of Georgia, where the charges were filed.

"This indictment is the result of a multiyear probe into abuses in vendor contracts in the Middle East involving the illegal inflation of prices in contracts to feed our troops," said F. Gentry Shelnutt, who is serving as acting U.S. attorney on the case. "The indictment alleges PWC submitted false information and manipulated prices to overcharge for food."

The charges came after federal officials joined a 2005 whistle-blower suit by Kamal Mustafa al-Sultan, the owner of a Kuwaiti company that had partnered with Public Warehousing to submit a proposal on the food supply contracts, the Justice Department said. The case remained under seal to let federal officials investigate the allegations and determine whether the U.S. government would join the lawsuit.

The whistle-blower's civil complaint was filed in Atlanta.

According to the indictment, the company violated the False Claims Act by presenting false claims for payment, overcharging for locally available fresh fruits and vegetables, and failing to pass along to the U.S. government rebates and discounts it had obtained, as required by its contracts.

The indictment does not say how much the United States was allegedly defrauded, because the investigation is under way, officials said.

"The defendants, tempted by monetary gain, betrayed the trust invested in them by the U.S. Army and now they must face the consequences," said Brig. Gen. Rodney Johnson, commander of Army Criminal Investigation Command.