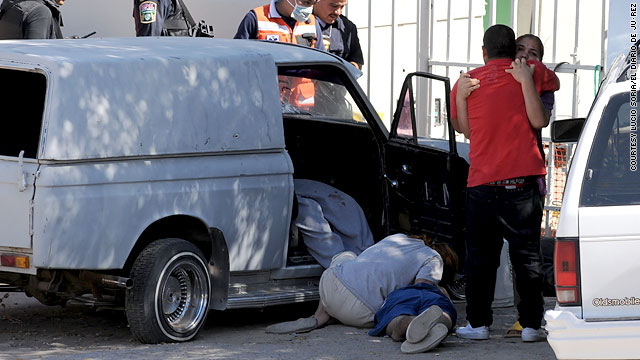 (CNN) -- Lucio Soria is a recorder of the dead in Ciudad Juarez's drug cartel war.

"El Sorias," as he is affectionately called by his colleagues, is a photojournalist for the Mexican city's two main daily newspapers, El Diario and El PM. For the last 10 years, his job has been to photograph the bodies and crime scenes left behind after cartel hit men completed their work.

"I see the photos of the dead as art, not as dead people. I feel sad for the families, they cry and sometimes I cry too," Soria told CNN in a recent telephone interview.

A regular shift goes from 6 a.m. to 2 p.m., or later if there are any last-minute bodies. The day is spent listening to police scanners and waiting for the code that will send Soria and a reporter rushing through the city's congested streets to a new crime scene.

My record is 16 dead in one shift.
--Lucio Soria
RELATED TOPICS

Soria knows that arriving at a crime scene too soon could mean a surprise encounter with the killers -- one that could cost him his life.

He is part of a group of journalists operating in one of the world's most dangerous cities. Every day the passion for their profession competes with the fear of death.

"There are challenges to the fulfillment of our mission, challenges we have never faced before," said Rocio Gallegos, the editor of El Diario, the city's main news publication, with a circulation of 55,000.

"Any journalist in Ciudad Juarez is at risk," she said.

On November 13, 2008, unidentified gunmen shot and killed Rodriguez, 40, while he was parked in front of his house with his 8-year-old daughter in the car; she was not harmed.

Rodriguez had been receiving threats since February, Gallegos said.

One year later, no one has been charged in his death, and the two lead federal investigators in the case have also been killed. A spokesperson for the attorney general's office told CNN the case is still under investigation, but local journalists have interpreted this as a grant of impunity for crimes against their profession.

"The death of Armando Rodriguez left a clear message for everyone: Mind your own business! 'No te metas en donde no debes,'" said Edgar Roman, director of news programming for Channel 44, which broadcasts more than six hours of news each day.

The death of Armando Rodriguez left a clear message for everyone: Mind your own business!
--Edgar Roman

For Roman, and for several others in his position, investigative reporting has become a casualty of war.

"We can't investigate because we become targets. Only that which happens in plain view is OK to report," said Roman.

"Everyone knows the rules of the game," said Ricardo Ainslie, professor of educational psychology at the University of Texas in Austin and a member of the Lozano Long Institute of Latin American Studies.

For the last year, Ainslie has been using Ciudad Juarez as the center for his research on the Mexican war against the drug cartels.

"You can report what happens on the street, which is public domain, and sometimes they will get threats if they don't report something," Ainslie said. "They can't report backstories, or make inferences about motives. They are treading lightly because they can not afford to investigate -- this means execution."

"There are more armed groups that have no respect for law and order," he said. "What would they do if they captured a journalist? There is no leverage. They will just kill you and carry on with their business."

Figuring out how to keep staffers safe from an attack has been an ongoing challenge for newsrooms in Juarez. Armored vehicles and bulletproof vests provide little protection against the .50-caliber bullets fired by the cartels.

They will just kill you and carry on with their business.
--Tim Crockett

El Diario has managed to keep some investigative reporting by omitting reporter bylines. For Gallegos, self-censorship is not the answer.

"We have kept our investigation, which has cost us because we have less access to government sources," Gallegos said. "With the argument of security, authorities have given us less access to information and documents," she said.

"The biggest challenge is to carry out our mission to inform the public without renouncing to our independence from the authorities, and without becoming messengers to the cartels," said Gallegos.

Cartels have begun to time their executions to coincide with live newscasts, journalists say.

Channel 44 evaluates its programming by holding bimonthly focus groups. Roman said his audience has gone from being spectators to being the victims.

"People are asking us to show a city with hope, and not a city of desolation and destruction. People are tired of living like this. Despite all the violence, there are people who want to keep living a normal life," he said.

El PM is the paradox. The newspaper has a daily circulation of 70,000 to 75,000, and normally sells out within two hours of hitting the stands. The main cover picture is usually a bloody crime scene. Some describe it as a "listing" for the day's dead.

"You cannot cover the sun with one finger; we say it like it is. We give it a human side and the raw side," said editor Alejandro Tellez.

"We live in a city where you go to the streets and you walk into yellow tape and then you come to us to find out what has happened," said Tellez.

Ainslie said his research has shown that violence is part of the fabric of daily life in Ciudad Juarez.

"Everybody is living it," he said. "Everybody is seeing it. It is in every part of the city. ... Do you not report it because people are worn down and there seems to be no end?"

Everybody is living it. Everybody is seeing it. It is in every part of the city.
--Richardo Ainslie

Ainslie added that he was also struck by the difference in the reporting across the border in Ciudad Juarez's U.S. sister city, El Paso, Texas. On one day, he recalled, El Diario carried 15 cartel-related stories, including "three or four on the front page. The El Paso Times carried three cartel stories.

Angela Kocherga is one of the few American journalists reporting from Ciudad Juarez on a weekly basis. She said the coverage of the cartel war by American news organizations has been sporadic at best.

"Afghanistan, Iraq are important stories, but Mexico gets lost in the mix day in and day out. The impact on the border is ignored. There is an entire generation being wiped out. ... It's just festering and festering and it's out of control. Ignoring it is not going to make it go away," she said.

For some journalists in Ciudad Juarez, it has become a life's mission to tell the world about this war and to write their country's history.

Soria feels he left his mark when, on October 20, he photographed the 2,000th victim of the cartel war.

His shift was nearly over that day, and the body count stood at 1,996.

"I told my reporter, 'Well, I guess I'm not going to get the 2,000.' Then I heard on the scanner that there were three dead and the address was really close to where we were. That day we reached 2001 dead," he said.

"When I arrived, the military and the police where putting up the crime tape. The parents were hugging and holding each other. I wanted to record history, so that everyone would remember that moment. We are the ones keeping a log of the dead. I want to be remembered as the one who took that photo," said Soria.

Soria's photo tells the story of hundreds of families in Juarez. It shows two family members hugging and a third one crying over the body of one of the men killed, with the police as onlookers.