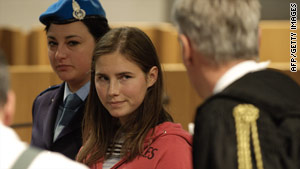 American student Amanda Knox looks at one of her lawyers before trial events Saturday in Perugia, Italy.

Perugia, Italy (CNN) -- A prosecutor says American Amanda Knox and her former boyfriend should get life sentences if they are convicted in the death of a British student, a lawyer for the victim's family told CNN on Saturday.

Kercher attorney Francesco Maresca said the public prosecutor also is seeking a sentence of life in prison for Sollecito. He and Knox, 22, are being tried on charges of homicide, sexual violence and attempting to cover up the crime.

Sollecito and Knox have denied the charges.

Maresca said he is satisfied with the jail time request, explaining it is "the proper sentencing for the type of crime that these people committed."

Prosecution arguments focusing on the forensic aspects of the case were to continue Saturday, and possibly into next week. Then it will be the defense's turn to make its points. The jury is scheduled to get the case December 4.

After the court recessed Friday, Knox's stepfather defended her against the prosecutor's accusations.

"She's an innocent girl looking at having to spend a lifetime in prison," Chris Mellas told reporters. "Of course she was upset. She had to sit there as he continued to say, 'Amanda this, Amanda that.' Yeah, it gets to you."

Police arrested Knox and Sollecito soon after Kercher's death, along with Guede, a native of the Ivory Coast who opted for a separate, fast-track trial and was convicted of murder and attempted sexual assault in October 2008.

The court sentenced Guede to 30 years in prison. He began an appeal of the verdict this week.

The key piece of evidence against Knox is a 6½-inch kitchen knife that prosecutors say was used to slit Kercher's throat.

The knife belonged to Sollecito and was found at his apartment with Knox's DNA on the handle and Kercher's DNA on the blade, according to a source close to the prosecution who did not want to be identified discussing an ongoing case.

On the night Kercher was killed, Knox and Sollecito say, they were at his house watching a movie and smoking marijuana.

Kercher had been away from home for only two months when she was killed. The Leeds University student was studying European politics and Italian in Perugia.

Knox, who attended college in her home state of Washington, also was studying abroad.