Investigators round up suspect's relatives in police killings 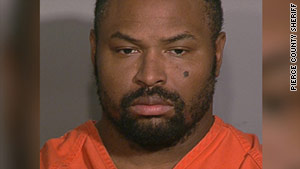 Maurice Clemmons is sought by authorities in the shooting deaths of four police officers in Washington state.

Seattle, Washington (CNN) -- Investigators searching for the suspected killer of four Seattle-area police officers have rounded up several of his relatives and friends to keep them from helping him escape, a sheriff's spokesman said Monday.

Police have brought in five or six relatives and other acquaintances of Maurice Clemmons, "and we expect that number to grow," Pierce County Sheriff's Department spokesman Ed Troyer said.

Some of Clemmons' family and friends have been trying to help him elude police and seek treatment for a gunshot wound, and they have tried to divert investigators by calling in false leads, he said.

"What we're going to do is eliminate those people, so he'll have no place to go," Troyer told CNN. A raid in the southern Seattle suburb of Renton late Monday was aimed at cutting off Clemmons from that support network, he said.

Clemmons, 37, is an ex-convict with a long rap sheet in Washington and Arkansas, according to authorities and documents. He is wanted in what police called the ambush-style killing of four police officers from Lakewood, near Tacoma, about 40 miles south of Seattle. Witnesses say Clemmons was shot in the torso during the Sunday morning attack, and blood and gauze bandages were found in a truck linked to Clemmons, Troyer said.

The sheriff's department said associates who refuse to cooperate with the investigation could face criminal charges.

Clemmons is thought to have slipped away from a home in Seattle's Leschi neighborhood Sunday night, before police surrounded the residence for about 12 hours. He was not found in the home when the investigators moved in Monday morning, Seattle police spokesman Jeff Kappel told reporters.

Video: Manhunt on for suspect

His escape was "an unlucky thing for us, and a lucky thing for him," Troyer said Monday night. "But his luck's going to run out, because he doesn't have people to help him do that any more."

The slain officers, three men and a woman, were killed at a coffee shop in Parkland, a suburb of Tacoma. Early Monday, authorities started identifying Clemmons as a suspect, rather than as someone wanted for questioning.

The night before the shootings, Clemmons had threatened to kill police officers, but witnesses did not report those threats until after the slayings, Troyer said on ABC's "Good Morning America."

Clemmons was accused of child rape and assaulting a police officer in May. He had been released on $150,000 bond five days before the shootings, according to court records.

After his arrest, Clemmons' sister told police that he "had not been himself lately" and that his behavior was "unpredictable and erratic."

"He had said that the Secret Service was coming to get him because he had written a letter to the president," an affidavit quoted her as telling investigators.

In addition, neighbors had complained that he had been throwing rocks through their windows. Clemmons' wife told deputies that she and her husband had argued over a "newly discovered child," and she suggested that was why he went on his rock-throwing spree, according to an arrest affidavit.

In 2000, then-Arkansas Gov. Mike Huckabee commuted a 95-year prison sentence for Clemmons, according to documents from the Arkansas Department of Community Correction. He returned to prison in 2001 but was paroled in 2004.

"Should he be found responsible for this horrible tragedy, it will be the result of a series of failures in the criminal justice system in both Arkansas and Washington state," Huckabee's office said in a statement Sunday night.

During his 2008 presidential bid, Huckabee was criticized for granting clemency to another inmate, convicted rapist Wayne DuMond, who was later convicted of raping and murdering a woman in Missouri. Huckabee's statement brought a sharp response from Troyer on Monday.

"We're disappointed that Gov. Huckabee came out in the middle of the night without calling anybody here and blamed this on the criminal justice system in the state of Washington," Troyer said. "We're guessing that's probably a spin doctor, not him."

Sunday's shooting was the first for the Lakewood police department, which was created five years ago for the town of nearly 60,000. Until then, the Pierce County Sheriff's Department provided law-enforcement services there.

The slain officers were identified as Sgt. Mark Renninger, 39; Officer Ronald Owens, 37; Officer Tina Griswold, 40; and Officer Greg Richards, 42. All of them were parents and had been with the department since its inception.

"My worst nightmare has come true," Tiffany Ryan, Griswold's sister, told reporters. "I can't tell you how painful it is to lose my sister."

Police Chief Bret Farrar told reporters Monday that he has repeatedly been asked how the city's officers are doing.

"This is how everybody's doing," Farrar said, gesturing to the police force standing behind him. "They're here. They're doing their jobs. They're working hard. They're dealing with their loss. ... We're here to carry on. This is what we do."

The four officers "were good people," Farrar said, fighting to maintain his composure. "They were great officers, and we will all miss them very much."

The Lakewood Independent Police Guild is accepting donations for the officers' families, said guild president and Lakewood police officer Brian Wurts. Contributions have poured in from as far away as Switzerland, he said.

"I can't believe he was out on the street," Wurts said of the suspect.

The coffee shop on Steele Street is a popular hangout for law enforcement officers and is one of 22 Forza Coffee Company locations in Washington. The company's CEO, Brad Carpenter, is a retired police officer. In a statement on the company Web site, he said the shooting "hits extremely close to home to me."

Police said the gunman walked past the officers to the counter as if to order, then pulled a gun out of his coat and began shooting at 8:15 a.m. Sunday. Two of the officers were "executed" as they sat at a table, Troyer said.

Another was shot when he stood up, and the fourth was shot after struggling with the gunman all the way out the door, Troyer said. All were in uniform, with their marked patrol cars parked outside. Two baristas and other customers inside the shop were unharmed.