Amanda Knox prosecutor: We had a strong case 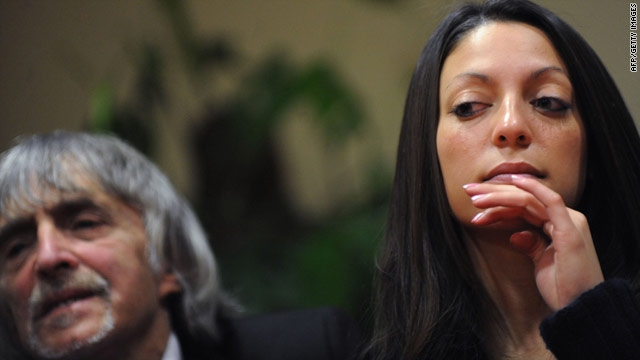 Perugia, Italy (CNN) -- Family members of Meredith Kercher said Saturday they were satisfied with the verdict that found American Amanda Knox and her Italian ex-boyfriend, Raffaele Sollecito, guilty of the fatal knifing of the British student.

"Ultimately we are pleased with the decision," said Lyle Kercher, Meredith Kercher's brother. "But it was not a moment of celebration. We are here because our sister was brutally murdered."

"Our lives have been on hold, really. You can't really carry on as normal," she said. "You have to take each day as it comes. It's not ever going to be the same without [Meredith]."

Knox and Sollecito were found guilty of murder Friday after a lengthy, sensational trial. Knox was given a 26-year sentence; Sollecito was sentenced to 25 years. Both will appeal, attorneys said.

Knox and Sollecito were convicted on all charges except theft. The pair was accused of staging a theft to cover up the killing. Authorities said 300 euros (about $444) was discovered missing from Kercher's purse.

One of Knox's sisters said Saturday that Amanda "had a rough night."

Her mother, Edda Mellas, said, "She had a lot of support. The inmates and the guards were all taking great care of her. They care a lot.

"Amanda, like the rest of us, is extremely disappointed -- upset about the decision," Mellas said. "We're all in shock; we're all heartened by the support" that she said residents of Perugia and other Italians had shown.

"People from all over the world have been sending us messages of support all through the night," Mellas said. "We told her she's going to get out of there. It's [just] going to take a little longer."

Sollecito's lawyer, Luca Maori, criticized his client's punishment -- less than the life sentence the prosecution requested but far short of exonerating Sollecito -- as making no sense.

"For the grave crimes they claimed, you either sentence them to life. ... or you acquit. There is no middle way," Maori said.

Public prosecutor Giuliano Mignini told CNN he feels he presented a strong case. He said about 20 magistrates worked alongside police during the investigation. However, he said that in the face of the planned appeals, clearly the conviction is not final.

Learn how the murder case played out

People who disagree with the verdict should at least respect it, because so many professionals were involved in the investigation, Mignini said.

"I believe, evidently, that they think there was violence. They are the deputies who establish the foundation" of charges, he said. "And they did this."

The victim's mother said she believed the defendants were guilty of the slaying.

"You have to go with the evidence," Arline Kercher said.

Take a look at the evidence against Knox

Knox's lead defense attorney, Luciano Ghirga, said that when he met with his client Saturday morning, she was angry and continued to proclaim her innocence.

He told CNN the situation has been a trying experience, and Knox hardly slept Friday night after the verdict. She was consoled by the other prisoners, who managed to get her a cup of warm milk, Ghirga said.

The jury reached its verdict after deliberating nearly 11 hours on the 11 counts. Jurors must submit an explanation of how they reached their decision to the judge within 90 days, and this "jury motivation" will be made public.

Prosecutors had asked for a sentence of life in prison. Italy does not have the death penalty.

CNN's Richard Greene and Hada Messia contributed to this report.