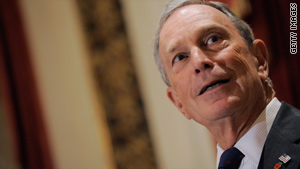 Mayor Michael Bloomberg says New York is on track toward its fewest number of murders in one year since reliable records have been kept.
STORY HIGHLIGHTS
RELATED TOPICS

The declines occurred in nearly every crime category, including the "lowest number of murders ever," Bloomberg said Monday.

According to the mayor's office, there have been 461 homicides to date on Monday in 2009. That number is down nearly 11 percent from the same time a year ago, with 516 murders recorded in 2008. Bloomberg said 2009 is on track to have the fewest murders in New York City's history since reliable recordkeeping began in 1963.

Bloomberg, with New York Police Commissioner Ray Kelly at his side, relayed the latest findings at the New York Police Department graduation ceremony for the city's 250 newest officers.

The mayor said the drop in New York's crime rate can be attributed to a combination of using new technologies and strong management, using statistics in police planning and responses, adequately funding the department and focusing resources to address problem areas.

Along with stringent gun laws, regulations and enforcement mechanisms, the combination of all these strategies "have helped to substantially reduce the level of violence on our streets," Bloomberg said.

Started in January 2003, the operation floods troubled areas, known as "Impact Zones," with teams of rookie and veteran police officers. The program has allowed the police department to mass resources to provide security for those living in high-risk locations, Kelly said.

New York City had not had a year with fewer than 600 recorded murders before 2002, but there have been eight consecutive years with fewer than 600 slayings, according to crime records. This year also saw the 19th straight year of overall decline of major felony crimes, authorities said.

The highest spike in New York City murders came in 1990, when 2,262 people were killed, according to the NYPD.

National violent crime trends also are on the decline, according to the FBI. The bureau released nationwide crime statistics in June for the first half of 2009, showing a nearly 4.5 percent drop in overall violence. Murder is down by 10 percent from a year ago across the United States, according to the FBI.

The new class of officers from Monday's graduation joins the largest police force in the world, one with about 38,000 uniformed personnel.

"The world will be watching them start their careers," Kelly said at Monday's graduation. "Their first assignment is on patrol at Times Square on New Year's Eve."