You may be more racist than you think, study says

(CNN) -- Would you get upset if you witnessed an act of racism? 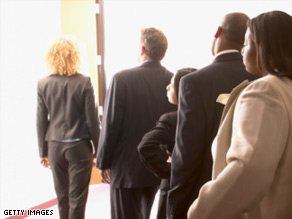 A new study shows that many people may unknowingly hold racist views, contrary to how they view themselves.

A new study published Thursday in the journal Science suggests many people unconsciously harbor racist attitudes, even though they see themselves as tolerant and egalitarian.

"This study, and a lot of research in social psychology, suggests that there are still really a lot of negative associations with blacks," said Kerry Kawakami, associate professor of psychology at York University in Toronto, Ontario, and lead author of the study. "People are willing to tolerate racism and not stand up against it."

The authors divided 120 non-black participants into the roles of "experiencers" and "forecasters." The "experiencers" were placed in a room with a white person and a black person, who played out pre-arranged scenarios for the experiment. The scenarios began when the black role-player bumped the white role-player's knee when leaving the room.

The "forecasters," meanwhile, predicted how they would feel in these situations.

The magnitude of the results surprised even the authors, Kawakami said. Experiencers reported little distress in all three scenarios, much less than the forecasters did in the moderate and severe situations.

"Even using that most extreme comment didn't lead people to be particularly upset," said co-author Elizabeth Dunn, assistant professor of psychology at the University of British Columbia in Vancouver.

"Some people might think that they're very egalitarian and they don't have to deal with their prejudices, and that's not related to them at all, when in actual fact they may hold these hidden biases," Kawakami said.

The study is consistent with decades of psychology research pointing to the same thing: People are really bad at predicting their own actions in socially sensitive situations.

"That point is getting renewed attention as researchers develop more extensive evidence establishing reasons to distrust self-report measures concerning racial attitudes," said Anthony Greenwald, professor of psychology at the University of Washington, who was not involved with the study.

The racism study harkens back to Stanley Milgram's famous experiment that began in the early 1960s, in which most people obeyed orders to deliver electric shocks to an innocent person in the next room. Many psychiatrists had predicted that the majority of subjects would stop when the victim protested, but this was not the case. Read more about the Milgram study

Regarding racism, in a famous study from the 1930s, people behaved in a non-racist manner that contradicted what they reported later. Richard LaPiere sent a Chinese couple to restaurants and hotels in the U.S., and most of these establishments accommodated them. But when LaPiere contacted the same places about whether they serve Chinese people, most said they did not.

More recent work by Greenwald and colleagues shows that most people --between 75 and 80 percent -- have implicit, non-overt prejudices against blacks. Their Web site, Project Implicit, has a slew of tests that Web users can take to compare their self-perceptions to their underlying attitudes about people based on different social categories, such as race, age and obesity. Take the Implicit Association Test

What is responsible for these attitudes? Experts say one culprit is images in television, news and film that portray blacks in a negative light.

"I don't think what's in people's heads is going to change until the environment that places these things in their head has changed," Greenwald said.

All About Psychology • Racism and Bigotry