(CNN) -- We all make bad decisions sometimes. In some contexts, to a certain extent, psychologists know why. 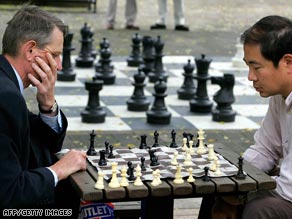 Chess players, with experience, learn how to make rapid judgments about their moves.

Much research on the subject was done by Daniel Kahneman and Amos Tversky, who shared the 2002 Nobel Prize in Economics for their models of how intuitive reasoning is flawed in predictable ways. Kahneman is now professor emeritus at Princeton University, and Tversky died in 1996.

But other researchers are working on showing that, when it comes to more basic judgments, we're not so bad.

Research in the current issue of the journal Neuron offers a mathematical model for how people make decisions about visual stimuli on a computer screen. They found that humans make accurate judgments about cues they can see.

"We're discovering that humans aren't so stupid after all," said Alexandre Pouget, co-author of the study and associate professor of brain and cognitive sciences at the University of Rochester in New York.

Participants were asked to look at moving dots on a screen. Many of the dots moved randomly, but some moved in one clear direction. Researchers found that people very quickly realized which way the non-random dots were going.

The work complements that of Kahneman and Tversky in that it shows humans are good at lower-level, nonlinguistic tasks, while perhaps not so good at higher-level probability problems involving words, he said.

"In simple perceptual decisions -- you have a visual stimulus on the screen and you have to make decisions about it -- it looks like you do accumulate the evidence optimally, given that uncertainty," Pouget said.

Psychologists believe the human mind has two systems for decision-making: intuitive and reasoning. The intuitive system is emotional, fast, automatic but slow-learning, while the reasoning system is emotionally-neutral, slow, controlled, and rule-governed. Neither, of course, is always right, but there are certain simple problems that reveal flaws in intuition.

A classic example that Kahneman has often used in lectures is this math problem: A bat and a ball together cost $1.10. The bat costs a dollar more than the ball. How much does the ball cost?

Your intuitive system may quickly tell you that the ball costs 10 cents. That would be an easy solution, but it would also be incorrect.

In fact, if the ball costs 10 cents, that would mean the bat costs $1.10, so the two together would be $1.20 -- violating the first piece of information you had. A little algebra, or a little more thought, reveals that the ball must have cost 5 cents. Oops.

You might think that the second one seems more random, so it's more likely. That error would fall into what Kahneman and Tversky would call the representativeness heuristic or, more specifically, the misconception of chance -- in other words, we tend to go on our intuitive notions of what an unrigged coin toss should look like rather than actually calculating.

If you think about the probabilities of each, you'll realize the two combinations are equally likely.

A related concept is called fundamental attribution error, demonstrated by Edward Jones and Victor Harris in 1967. The researchers gave people texts, some of which opposed Fidel Castro and some of which supported him. Most subjects said the writers held the beliefs expressed in the essay, even after the experimenters told them that an instructor or experimenter had previously dictated the essay's stance to the writer. The point is that the subjects did not take into the account all of the situational factors when making a decision about the writers' attitudes.

Intuition is not always wrong. Expert chess players, for example, develop extraordinary speed in making moves, and learn to instantly recognize the available moves and strategies based on the board. Team sports players operate in much the same way.

There are, however, limits to what intuition can offer. Experts say it's important to distinguish between decisions that should be made by intuition and those that require careful calculation.

"With respect to accuracy, it all depends on the nature of the decision. I would not rely on my gut judgment when picking stock options for my retirement portfolio, for example," said Alexander Todorov, assistant professor of psychology and public affairs at Princeton University.

Some of the most remarkable mental feats are done entirely without awareness, such as color vision, said Eldar Shafir, professor of psychology and public affairs at Princeton University. Other tasks require more effort, with less impressive results -- for example, humans can't navigate as well as a honeybee, which has a brain the size of the head of a pin.

"We -- like every other biological organism -- do some things remarkably well, and often unbeknownst to us. Other things, we do remarkably badly, even if we might think -- sometimes with great confidence -- otherwise," Shafir said.