Kellogg warns not to eat its peanut butter crackers

(CNN) -- The Kellogg Co. announced Wednesday it is recommending that consumers not eat its peanut butter crackers because they may be tainted with salmonella. 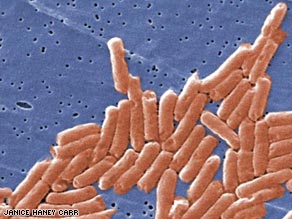 The products affected are Austin- and Keebler-branded:

The Michigan-based maker of cereals and snacks posted the recommendation in a statement on its Web site.

Peanut butter produced by Peanut Corporation of America, one of several peanut butter suppliers to the company, has been linked to an outbreak of salmonella poisoning that has affected at least 434 people in 43 states, federal health officials said Wednesday.

"Kellogg Company's investigation has not indicated any concerns, nor has the company received any consumer illness complaints about these products," the Kellogg statement said.

"Nonetheless, Kellogg Company is taking precautionary measures including putting a hold on any inventory in its control, removing product from retail store shelves, and encouraging customers and consumers to hold and not eat these products until regulatory officials complete their investigation of PCA and Kellogg provides further information as to the resolution of this issue."

All of the company's peanut-butter crackers are made at its bakery in Cary, North Carolina, said spokeswoman Kris Charles.

Though consumers are urged "to hold the product until we have more information," Charles recommended anyone seeking a refund call 888.314.2060 for details about how to get one.

All About Kellogg Company • Food Poisoning