Don't let stress be such a grind

ATLANTA, Georgia (CNN) -- Alan Franco, a wealth manager from Atlanta, Georgia, has a confession to make: He's a grinder. 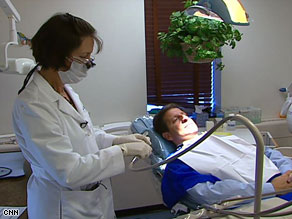 Dr. Jane Puskas found that patient Alan Franco has been grinding his teeth.

"I would feel tightness in the jaw in the morning when I would wake up," he recalled. "I didn't think anything about it."

But his dentist did. Dr. Jane Puskas not only diagnosed Franco's teeth-grinding problem, but she thinks she knows what is causing it.

"Though many people want to deny that it is related to stress, I definitely see a correlation between stress and grinding," said Puskas.

Teeth grinding, or bruxism as it is formally called, is a fairly common dental condition.

Puskas estimated it affects nearly half her patients. "Bruxism is when tooth grinding is not a normal pattern," she explained. "You're clenching or grinding them together not to chew, but to run your teeth together."

It may be caused by stress and anxiety, or anger and frustration.

The ADA says both adults and children can be affected by the condition, which can occur during the day as well as at night.

"It most often happens at night when patients have no control over the habit and often aren't even aware they're doing it," Puskas added.

She mentioned that bed partners are sometimes the first to realize there is a problem, when they are awakened by the unmistakable noise of teeth gnashing together.

Many patients also complain to their dentists about specific symptoms.

"I had pain in the top of my head that felt like terrible muscle strain," related Mary-Elizabeth Ellard of Atlanta. "I also had pain in my face and tenderness along my jaw."

Other signs of bruxism include "generalized tooth pain ... difficulty opening the mouth ... and even temperature sensitivity," Puskas said.

Dr. Noshir Mehta, director of the Craniofacial Pain Center at Tufts University in Boston, Massachusetts, pointed out that when someone grinds his or her teeth during sleep, there is an average force of 250 pounds of pressure on the teeth.

"It's like having a football player stand on your teeth," Mehta said.

Puskas worries most about the patients who ignore the symptoms.

"Those with wear will continue wearing down their teeth and ... if you keep grinding at this rate, you won't have any teeth," she said.

Fixing damaged teeth is difficult and expensive, according to Puskas. "You can't restore one tooth," she said. "You have to restore the entire mouth."

There is no cure for bruxism, but Puskas says there is a way to stop the damage. She recommends a custom-made mouth guard that is worn while patients sleep.

"It's not going to stop them from clenching and grinding but it will take away the ill effects so they are not going to wear the teeth," Puskas explained. "The night guard is like a stress breaker."

Both Franco and Ellard have started wearing mouth guards when they go to bed and they said they have noticed a difference.

Mouth guards are not cheap. Puskas estimated the cost at around $650. Some dental appliances are covered by insurance. Some are not.

Puskas does not recommend mouth guards sold over the counter.

They may be less expensive, she acknowledged, but they aren't stable enough to balance the bite. Some patients may chew right through the plastic.

Regular exercise and meditation help promote relaxation and may offer relief to those with stress-related bruxism.

Puskas also urges everyone to get regular dental checkups. She said an oral exam is the best way to diagnose the problem.

While the signs of bruxism may be subtle early on, a dentist may be able to help prevent more serious trouble down the road, Puskas said.

All About Dental and Oral Health