Americans are living longer because the air they breathe is getting cleaner, a new study suggests. The average drop in pollution seen across 51 metropolitan areas between 1980 and 2000 appears to have added nearly five more months to people's lives, according to a study published Wednesday in The New England Journal of Medicine. 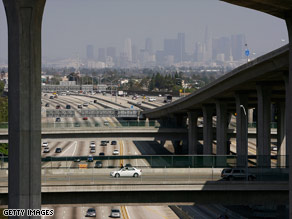 Fine particulate air pollution is inhaled deeply into the lungs and can cause a host of health problems.

Residents of cities that did the best job cleaning up air pollution showed the biggest jump in life span; for example, Pittsburgh's clearer air meant people there could expect to live nearly 10 months longer.

"Here's a situation where we say, 'We think that improving our air quality should improve health and life expectancy,' and so we did it, in many cities more so than others," says lead researcher C. Arden Pope III, Ph.D., of Brigham Young University in Provo, Utah. "We wait a couple of decades and see if it really helps, and the answer is that it did, and that's good news."

Long-term exposure to dirty air -- specifically, the tiny specks known as fine-particulate air pollution -- shortens lives and contributes to cardiovascular and lung disease. Particulate matter is inhaled almost like a gas and is thought to hike blood pressure, heart attack risk, and the chance of heart disease-related death.

The American Heart Association and the American College of Cardiology recommends that heart patients avoid driving for two to three weeks after leaving the hospital to avoid pollution (and stress). Other research has suggested that a nonsmoker living in a polluted city has about the same risk of dying of heart disease as a former smoker. Health.com: 5 ways to keep pollution from harming your heart

Gas and diesel engines, coal-fired plants, steel mills, smelters, refineries, and other industrial processes involving burning at high temperatures produce these particles, which are no bigger than 2.5 microns across -- or about one-fortieth the diameter of a human hair. "Those are the ones that can penetrate deeply into the lungs and cause most of the health problems," says Pope.

The Clean Air Act of 1970 set nationwide air quality standards and motor-vehicle emissions standards for the first time, and the federal government and some states have continued to take steps to tackle air pollution. Health.com: Both indoor and outdoor pollutants linked to heart problems

Thanks to these efforts, U.S. air quality has improved. Pope and his team decided to use U.S. data on fine-particulate matter concentrations and life expectancy from the late 1970s and the late 1990s as a "natural experiment" to determine whether cleaner air had any effect on health.

Many other factors can boost life expectancy, such as increases in income and education and reductions in smoking prevalence, so the researchers used statistical techniques to control for these and other relevant factors. After this adjustment, they found that the effect of air pollution reduction remained; for every 10 microgram per cubic meter decrease in fine-particulate air pollution, life expectancies rose by about seven months. Pollution levels averaged about 21 micrograms per cubic meter in 1979-1983 and had fallen to an average of 14 micrograms per cubic meter by 1999-2000.

Life expectancy for the corresponding time periods rose from 74 years to 77 years. Pope and his team calculate that reductions in air pollution accounted for as much as 15 percent of the increase in life expectancy. Heath.com: Heart Quiz: What's your real risk?

While there is plenty of research linking air pollution to increased mortality and worse health, noted Daniel Krewski, Ph.D., a professor of epidemiology and medicine at the University of Ottawa, the current study is among the first to show how cleaning up pollution affects health. "It's a very important contribution," said Krewski, who wrote an editorial accompanying the study.

Bert Brunekreef, Ph.D. , director of the Institute for Risk Assessment Sciences at the University of Utrecht in the Netherlands, said the current study could help encourage government and industry to address air pollution in parts of the world where it is a serious threat to health. "Showing public health benefits of changes in pollution is a strong message, comparable to studies documenting health benefits of smoking bans," he said via email.

According to the Environmental Protection Agency, particulate matter 2.5 microns in size declined in the United States by an average of 11 percent between 2000 and 2007.