(CNN) -- A woman from China's far northwest has died from bird flu, health authorities said Saturday, making her the country's fourth fatality from the deadly avian influenza so far this year. 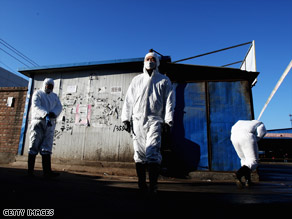 The 31-year-old woman, who was identified by her first name Zhang, fell ill on January 10. She died Friday morning, according to the health department in Xinjiang Uygur Autonomous Region.

Tests were positive for H5N1, the department said in a statement posted to the Health Ministry's Web site.

The official Xinhua news agency said a 16-year-old boy, who had fallen ill on January 8, died in the city of Huaihua in central Hunan province.

The country's Ministry of Health had then moved to allay fears over the outbreak, saying that although further human bird flu cases were possible throughout China, there wouldn't be a large-scale outbreak, Xinhua and CCTV said.

One week ago, a 27-year-old woman from eastern China died of bird flu, the Ministry of Health said in a statement.

In addition, the World Health Organization said a two-year-old girl in northern China had tested positive for bird flu.

The girl fell ill on January 7 in central Hunan province and was taken to her home province of Shanxi in northern China, the state-run news agency Xinhua said. The report did not say how she became infected.

Since the end of 2003, the H5N1 virus has infected numerous species of birds in more than 60 countries in Asia, Europe and Africa. It has not been found in birds in North or South America or the Caribbean, according to the Food and Agriculture Organization of the United Nations.

Human-to-human transmission of avian flu is rare, but in some cases the virus has passed from poultry to humans. It has killed more than 200 people since 2003.

China reported its first human-to-human infection case in 2005. Authorities recently announced they were setting up a nationwide network to test for the virus.

All About Bird Flu • China