Cutting calories may boost your memory

Having a senior moment? A new study suggests that cutting calories may help. 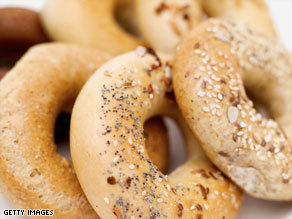 Cutting down on calories could help women retain their memory, according to a study conducted in Germany.

Older adults who cut down on the amount of calories they consume get a two-for-one special: weight loss and better memory.

Healthy women ranging in age from 50 to 80 who reduced their calorie intake by 30 percent for three months not only lost weight, but their scores on verbal memory tests also shot up by 20 percent, according to a study conducted by Dr. Agnes Floel and her colleagues from the University of Munster in Germany, who published the results in the January issue of the journal Proceedings of the National Academy of Sciences.

"Even though the number of subjects in the study was not really high, they had really high, statistically significant improvements in their performance on the memory test," added Mattson, who studies caloric restriction and the brain in his role as chief of the Cellular and Molecular Neurosciences Section at the NIA's Laboratory of Neurosciences. He was not involved in Floel's investigation.

The study included 50 women, all of whom were either normal weight or slightly overweight. (The average body mass index was 28, which is about 175 pounds for a woman who is 5'6".) Twenty were assigned to the calorie-cutting group, 20 upped their intake of unsaturated fatty acids (which some studies suggest may help aging brains), and the remaining 10 stuck with their normal diet.

Unlike the women who cut down on calories, the women who ate more unsaturated fatty acids showed no improvement in their memories, nor did those in the control group. Health.com: 9 ways to save money and stay fit

The researchers showed that women who cut calories became more sensitive to the blood sugar-- regulating hormone insulin and had a drop in the inflammation-associated molecule C-reactive protein. Both factors have been linked to an improvement in brain function.

The findings add to growing evidence that calorie restriction can benefit health and longevity, but this shouldn't prompt already skinny seniors to start dieting, said Carol Greenwood, a senior scientist and assistant director of the Kunin-Lunenfeld Applied Research Unit at Baycrest, a Toronto academic medical center focused on aging. Older people who lose too much weight increase their risk of falls and fractures, said Greenwood, who studies diet and the brain but was not involved in the current research.

And eating less isn't the only way to get this effect, Greenwood said. Exercise appears to exert similar effects on brain function by boosting insulin sensitivity and fighting inflammation.

Participants in the current study who reduced their calorie intake met several times with dietitians for advice and were instructed not to eat less than 1,200 calories. "It's not really a crash diet," Floel said. Health.com: America's top 10 healthiest diets

Experts believe that, as Floel's study suggests, increased inflammation and a drop in insulin sensitivity (which is known as insulin resistance) may help explain why obesity and type 2 diabetes have been linked to worse mental performance and a greater risk of Alzheimer's disease.

Meanwhile, studies in animals dating back to the 1980s show caloric restriction can extend lifespan and slow aging. The current findings are "another piece of evidence that what we see in laboratory rodents on caloric restriction translates to humans," said Richard Weindruch, of University of Wisconsin--Madison, who has studied caloric restriction since 1975 but did not participate in Floel's study. "I find it somewhat remarkable that such a brief period of [caloric restriction] actually would have these effects."

Most studies in humans have looked at people who choose to sharply reduce their calorie intake long-term, he noted. This research has found clear signs of reduced cardiovascular disease risk, and perhaps slower aging, in these individuals. But this kind of lifestyle change isn't easy and is best done with professional help, Weindruch said. Health.com: 6 diet trends you should never try

"The whole trick here is to create a state of undernutrition without malnutrition, and it's not a completely straightforward thing to do," he said. Health.com: 5 shortcuts to a heart-healthy diet

Jeffrey Keller, a professor at Pennington Biomedical Research Center in Baton Rouge, Louisiana, who studies aging, metabolism, and neurodegeneration, agreed that seeing results after such a relatively short period of calorie restriction was surprising. It provides more evidence that what's going on in the rest of the body, from inflammation to belly fat, can have major effects on the brain, he added. "It may very well be it's the aging of the body that promotes the aging of the brain."

Researchers who study caloric restriction have two main theories on how it might slow aging. One argument is that eating less slows down metabolism, so that the body produces fewer free radicals, which are byproducts of oxygen metabolism that can harm body tissues. Another is that reducing calorie intake keeps cells under a constant low level of stress, which makes them better able to cope with higher levels of stress when it comes along -- similar to how the moderate stress induced by exercise can improve people's health.

Floel said she and her colleagues are now planning larger studies of calorie restriction and mental function and will perform MRI brain scans on participants before and after they reduce their food intake in order to better understand what's happening in the brain's gray matter.

In the meantime, the findings offer yet another reason for people to try eating a little less, Floel added. "It's probably a good idea anyway, and you might also do something for your brain."

All About Diet and Nutrition • Healthy Eating