ATLANTA, Georgia (CNN) -- Ordinarily, walking on a treadmill is no big deal for Carol Elam -- except when she's dressed in a hospital gown and attached to a heart monitor. 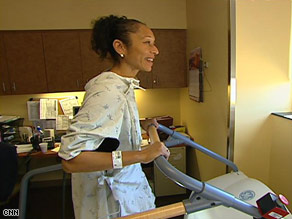 Carol Elam 54, started to worry about her heart health after turning 50; her own mother died at age 64.

"I decided I can't control too many things in my life, but if I can control something, I'm going to do as much as I can to control my health," she remarked.

Elam is among a growing number of middle-aged Americans who aren't waiting until they feel the first warning signs of a heart attack to see a doctor.

Dr. Winston Gandy, a cardiologist at Piedmont and Elam's physician, noted the trend not just in his own practice but in talking with colleagues across the country.

"Ten years ago, 60 percent of the people we took care of were people we had seen before," he said, referring to patients who were returning for post-treatment follow-ups. With the advent of medical therapies and technology that can help with early detection, he says, now 60 percent of patients are new to his practice.

And, like Elam, he said, many don't have any symptoms of heart disease.

Dr. Timothy Gardner, president of the American Heart Association, also noted the positive trend. "What Dr. Gandy said is true. It is encouraging to see the number of people who are getting the message."

He reminds his patients that cardiovascular disease is the No. 1 killer in the United States.

More than 80 million American adults suffer from some sort of cardiovascular disease; it's responsible for more than 864,000 deaths a year -- that's one death every 37 seconds.

Elam started worrying about her heart health shortly after she turned 50.

"My grandfather died at the age of 54. My mother passed at 64. ... I guess I had a wake-up call with my mother because of her high blood pressure," Elam explained.

She also learned that three of her siblings and a nephew were being treated with medication for high blood pressure.

Given her family history, Elam decided to undergo a baseline screening in 2005 with a treadmill stress test.

At the end of the 20-minute exam, Gandy informed her that she had a leaky heart valve and would need to be checked annually.

Today, her condition is routinely monitored using a treadmill stress test; she was not put on medication.

Under her doctor's guidance, Elam stepped up her exercise regimen, running up to 20 miles a week. She also sticks to a low-fat diet.

"I'm going to be honest: There are days where I don't really feel like running; I want to eat that fried chicken, but then I think that in the long run, that it's a lifestyle that I don't want to chose," Elam admitted.

"Overall, she did well. I would put her in the top 1 percent," he said.

He cautioned that this was just a screening test. If she felt any chest discomfort, he would want to see her again immediately.

Her four children range in age from 12 to 23. "I have to be here as long as I can to take care of my children," she said. "I also have to set an example for my children."