(CNN) -- In what is being heralded as a "first-ever procedure," surgeons removed a healthy kidney through a donor's vagina, the Johns Hopkins Medical Center has announced. 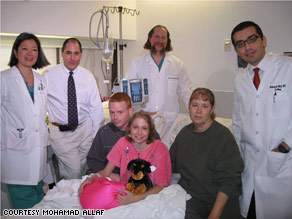 Jennifer Gilbert, center, received a kidney from Kimberly Johnson, at right in green.

Although the procedure has been previously done to extract cancerous and nonfunctioning kidneys that threatened a patient's health, the January 29 surgery was the first time it was done for donation purposes, the center said in a news release issued Monday.

"The kidney was successfully removed and transplanted into the donor's niece, and both patients are doing fine," Dr. Robert Montgomery, chief of transplant surgery at Johns Hopkins, said in the release.

The surgery is considered less invasive and could pave the way for an increase in organ donations, it added.

"Removing the kidney through a natural opening should hasten the patient's recovery and provide a better cosmetic result," Montgomery said.

He told CNN on Tuesday, "We want to make it easier for people to donate, to have less impact on their lives, [be] in hospital a shorter amount of time and get back to their lives quicker."

The woman was chosen to be the first donor to undergo the procedure because a previous hysterectomy enabled doctors to operate without a uterus obstructing their efforts, he added.

The three-hour procedure typically allows the donor to return home within 24 hours.

The more traditional surgery requires a 5- to 6-inch incision through the abdominal wall and generally is followed by two or three days of hospitalization.

"If you asked our patient, she said it was like getting a tooth removed. She was walking that night and left the next day," Montgomery said.

The procedure is done by inserting "wand-like cameras and tools" through small incisions in the abdomen and navel.

Doctors then insert a hollow tube through the vagina with a bag at the end.

Once the kidney is cut loose, surgeons use video from the cameras to guide them as they maneuver the bag around the organ, place it in the tube and pull it out through the vaginal opening, Montgomery said.

A kidney weighs approximately one pound and is roughly the size of a clenched hand.

In an effort to ensure a more sterile procedure, the vagina is treated with Betadine, a sterilizing solvent commonly applied during surgery.

But some physicians wonder how clean the procedure can actually be.

He added, "delivering a kidney from the vagina, which is not sterile -- is it a potential risk or a real risk? We'll find out now."

Kaouk also expressed concern over the quality of the kidney once it has been squeezed into a tube.

"The concept of minimizing incisions and decreasing pain after surgery is always a good idea, but we should always check at what price," he said.

CNN's Elizabeth Cohen and Jennifer Pifer-Bixler contributed to this report.

All About Organ Donation