(CNN) -- Until recently, the Bilson household was under siege. Thirteen-year-old daughter Marissa, who has autism, ruled the roost, screaming shrilly until she got her way and enjoying special privileges that didn't extend to her siblings, Brittany, 15, and Brendan, 6. 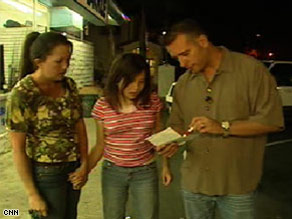 Behavioral therapist Rick Schroeder prepares Marissa for a walk through a store.

The family couldn't go out in public because of Marissa's tantrums, and they couldn't take her into stores because she'd shoplift what she wanted, or just scream until she got it.

But that was before.

Today, the Bilsons' family life is a lot calmer and quieter. That's because Marissa and her parents, John and Mary, are following the rules that were made during a five-day intervention. The intervention was provided to them free by the group Autism Partnership, or AP. Usually this type of treatment costs about $20,000 a week, and it's not covered by insurance, but because CNN was allowed to videotape the entire process, AP waived the fee for the Bilsons.

The intensive, one-on-one, in-home therapy was meted out by behavioral therapist Rick Schroeder, who used a technique of behavior modification known as "applied behavior analysis" or ABA. ABA essentially breaks down behavior patterns in order to reward good behavior and not reward bad behavior. Essentially, it's all about laying down the rules and sticking to them in a way that Marissa can understand.

Watch the therapist work with Marissa »

Marissa -- who before the therapy was, in Schroeder's words, "out of control" -- now has rules to follow, something she didn't have before.

Marissa's mother also learned some lessons about her daughter that week. "I learned that Marissa is smart," Mary Bilson said. "Smarter than I thought."

These days inside the Bilsons' cozy house, there is a lot less screaming and more boundaries are in place. The balance of power is tipping back into the hands of the parents and away from Marissa and her tantrums.

Did the therapy work? Watch life for the Bilsons "after" »

But there is still work to be done; the only difference is that now the Bilsons -- not Schroeder -- will be in charge.

The theory remains the same: "It's all about the teaching," Schroeder explains. "With a child like Marissa, we can't sit down and discuss it with her -- she's just not going to get that. So we have to take it in small steps. Make them understandable and move on, one step at a time."

That's just what the Bilsons are doing: One step at a time. They have increased the amount of time that Marissa has to practice her new behavior, from a starting time of 20 minutes a day toward a goal of 60 minutes.

Learn more about raising a child with autism »

In a recent e-mail, Mary Bilson wrote that the initial rewards that Schroeder had used with Marissa have lost their appeal, and Marissa wasn't interested in working for them anymore. However, Bilson added, she has discovered other rewards the teen is eager to work toward.

As a result, said Mary Bilson, her once unruly teen has continued to follow the rules that were put in place during that weeklong intervention: Marissa no longer goes into sister Brittany's room, she no longer monopolizes the family computer, and her once-frequent screaming fits have all but stopped.

Possibly best of all, Marissa can now go out in public without creating a scene -- a goal Mary Bilson was eager to achieve, because before, the Bilsons "could never go out together as a normal family."

In other words, one week of intervention therapy has done more than simply give Marissa some rules to follow and the household some much needed quiet. It has brought this once-divided family back together.