(CNN) -- When your lips gently brush against the mouth of your beloved this Valentine's Day, it may feel magically romantic, or sloppily slobbery, or blissfully gentle, or perhaps too rough and toothy. 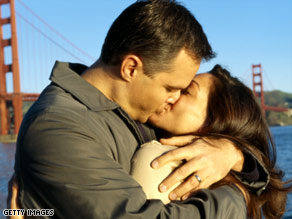 The science of kissing even has a name: philematology. Researchers are investigating the mechanisms involved.

Regardless, the practice of kissing is nearly universal. It is practiced in at least 90 percent of cultures among sexual or romantic partners, experts say. Now, scientists are investigating the biological factors underlying that ubiquitous expression of love.

The science of kissing even has a name: philematology. Research on the subject was presented at the annual meeting of the American Association for the Advancement of Science in Chicago on Friday.

"Kissing is not just kissing. It is a major escalation or de-escalation point in a powerful process of mate choice," said Helen Fisher, professor at Rutgers University and author of the book "Why Him, Why Her: Finding Real Love by Understanding Your Personality Type." Visit CNNhealth, your connection for better living

A study by Gordon Gallup Jr., professor of psychology at the University of Albany, showed that 59 percent of men and 66 percent of women reported that after feeling attracted to another person initially, the attraction ended after the first kiss, Fisher said.

Looking at a sample of more than 1,000 college students, Gallup and colleagues found that women also tend to emphasize kissing more than men, and are much more likely to insist on kissing before a sexual encounter.

A person receives information about the person he or she is smooching by locking lips, Fisher said. A kiss transmits smells, tastes, sound and tactile signals that all affect how the individuals perceive each other and, ultimately, whether they will want to kiss again.

Women tend to be attracted to male partners with a different immune system makeup from their own, Fisher said. They subconsciously detect information about a partner's immune system through smell during kissing, she said.

Research led by Wendy Hill, professor of neuroscience at Lafayette College, looked at how kissing affects the hormones oxytocin, sometimes called the "love hormone," which is associated with social bonding, and cortisol, a measure of stress.

The first experiment, which took place in a student health center, looked at college students age 18 to 22, and examined hormone levels in 15 heterosexual couples. In the control group, participants held hands and talked with their partner while music played. In the experimental group, participants were told to open-mouth kiss their partner for the length of the music -- 16 minutes.

The results showed that oxytocin levels in the women decreased after the session, but increased in the men. Researchers had expected those levels to go up in both genders; the decrease for women may have resulted from the artificial setting of the student health center, researchers theorize.

Researchers found that the longer the relationship of a couple, the more the cortisol levels declined in both partners. The heterosexual women, moreover, said they felt greater intimacy with their partners than the heterosexual men or the homosexual women did, while all groups expressed equal satisfaction in kissing their partners. The researchers are in the process of analyzing oxytocin levels in this experiment.

On the basis of brain imaging, Fisher proposes that there are three distinct brain systems involved in mating and reproduction: sex drive, romantic love, and attachment. Sex drive compels us to seek partners, romantic love tells us to commit to one, and attachment helps us "tolerate this person at least long enough" to have a child, she said. Kissing evolved to stimulate all three of these systems, she said.

Kissing "can really either escalate a relationship or really kill it," Fisher said.

We feel such sensitivity to kissing partially because of the way our brain is structured, Fisher said. The somatosensory cortex, which extends from one side of the brain to the other, has a large portion devoted to picking up signals from the lips, tongue, nose and cheek areas around the mouth.

"You can really get poked in the back and not feel it very much, but just a feather around your lips and you really do feel it," she said.

As for the origins of kissing, one theory is that kissing evolved as an extension of the way mothers used to feed their children. Early humans, who lacked jars of manufactured baby food, probably chewed up food and directly transferred it from their mouths to the babies', Gallup wrote.