CHICAGO, Illinois (CNN) -- Wouldn't it be great if you knew which foods you should be eating based on your own personal health profile? 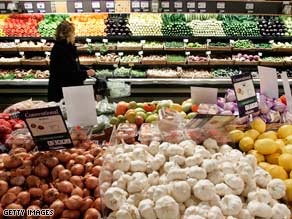 What's for dinner? In the future, you should know exactly what's best for your body, experts say.

We know that certain foods are bad for people with particular conditions, such as heart disease and diabetes. Advising a generally healthy person on foods that will prevent future disease, on the other hand, is far more complicated, and represents one of the challenges for scientists working in food science.

In the future, people should be able to tailor their diets and supplements to their particular biochemistry, said experts presenting at the annual meeting of the American Association of the Advancement of Science this week.

Right now the food industry is centered on products, said J. Bruce German, professor and food chemist at the University of California, Davis. That means profits depend on lowering the cost of production and making things cheaper.

"No one's getting healthy in this model," he said. "It's clear we have to move toward a consumer-driven food supply."

In a consumer-driven food world, the industry would focus its goals on improving all aspects of the consumer's health, he said. People would receive dietary recommendations based on a very specific individualized health assessment, taking into account age, sex and medical history, he said.

Once scientists have a better understanding of the way metabolism works -- research that is well under way -- people will be able to better personalize their diets to meet their own health needs, German said.

Right now, the blanket recommendations are missing the mark. For example, look at omega-3 fatty acids, which may reduce the risk of coronary heart disease. Although most people don't get the recommended intake of omega-3s, found mainly in fish oils, different healthy people react very differently to these acids, meaning some need them a lot more than others, German said.

Moreover, there's little hard evidence supporting the use of vitamin C and zinc supplements, although they're widespread in pharmacies, said Dr. M. Eric Gershwin, professor of medicine at the University of California, Davis.

As for herbal supplements like ginseng, Gershwin and colleagues found in a survey of products in Davis and Sacramento that half of the ginseng they bought actually contained no ginseng.

The immune system, "a complicated, multiorgan, chemical and genetic nightmare," evolved about 250,000 years ago, meaning it's unlikely that we can improve it much just by eating certain foods, Gershwin said.

What we do know is that being thin is good for the immune system, and that foods rich in antioxidants have the potential to reduce inflammation that occurs in the body, he said.

It's also important to recognize that the immune system slows down with age. When a baby gets hepatitis A, parents may not even know the child is sick, but older adults have a 25 percent chance of death from the disease, he said. In thinking about how to improve diets in the future, age is therefore a huge factor.

Educating the immune system at a young age is also key, and that means it's actually good that babies get exposed to some bacteria. Gershwin advises that if your child's pacifier falls on the floor, put it right back in his or her mouth.

In fact, one theory, called the hygiene hypothesis, is that allergies to foods and pollens in America are so rampant because we're too clean, experts say.

The bottom line is that being deficient in a nutrient such as vitamin D has harmful effects, but once you achieve a certain level, it's not clear that excess vitamins will help the immune system, Gershwin said.

Another direction that food science is taking is genomics. Researchers are looking at the genes of edible organisms to figure out what about them makes them beneficial to humans, knowledge that may enhance diets in the future.

For instance, scientists are looking into how human milk evolved. Curiously, one component of breast milk is something that infants cannot digest: oligosaccharides. Research in the last few years has shown that these oligosaccharides stimulate particular bacteria in the intestine, which is a beneficial process.

"The mother is recruiting another life form to baby-sit the infant," German said.

All About Foods • Vitamins and Supplements