CHICAGO, Illinois (CNN) -- It may seem obvious that men perceive women in sexy bathing suits as objects, but now there's science to back it up. 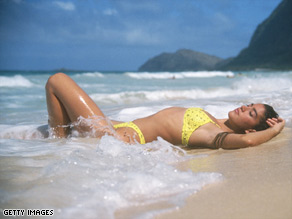 New research shows that, in men, the brain areas associated with handling tools and the intention to perform actions light up when viewing images of women in bikinis.

The research was presented this week by Susan Fiske, professor of psychology at Princeton University, at the annual meeting of the American Association for the Advancement of Science.

"This is just the first study which was focused on the idea that men of a certain age view sex as a highly desirable goal, and if you present them with a provocative woman, then that will tend to prime goal-related responses," she told CNN.

Although consistent with conventional wisdom, the way that men may depersonalize sexual images of women is not entirely something they control. In fact, it's a byproduct of human evolution, experts say. The first male humans had an incentive to seek fertile women as the means of spreading their genes.

"They're not fully conscious responses, and so people don't know the extent to which they're being influenced," Fiske said. "It's important to recognize the effects."

In the men who scored highest on hostile sexism, the part of the brain associated with analyzing another person's thoughts, feelings and intentions was inactive while viewing scantily clad women, Fiske said. Visit CNNHealth.com, your connection for better living

Men also remember these women's bodies better than those of fully-clothed women, Fiske said. Each image was shown for only a fraction of a second.

This study looked specifically at men, and did not test women's responses to similar images.

A supplementary study on both male and female undergraduates found that men tend to associate bikini-clad women with first-person action verbs such as I "push," "handle" and "grab" instead of the third-person forms such as she "pushes," "handles" and "grabs." They associated fully clothed women, on the other hand, with the third-person forms, indicating these women were perceived as in control of their own actions. The females who took the test did not show this effect, Fiske said.

That goes along with the idea that the man looking at a woman in a bikini sees her as the object of action, Fiske said.

The findings are consistent with previous work in the field, and resonate, for example, with the abundance of female strip clubs in comparison to male strip clubs, said Dr. Charles Raison, psychiatrist and director of the Mind/Body Institute at Emory University in Atlanta, Georgia. Raison was not involved in the study.

Previous research found that people tend to similarly dehumanize those who are homeless or drug addicts, although the phenomenon in this case is somewhat different, Fiske said. People have reactions of avoidance toward the homeless and drug addicts, and the opposite for scantily clad women.

The broader purpose of the research was to explore circumstances under which people treat one another as the means to an end, Fiske said.

Past studies have also shown that when men view images of highly sexualized women, and then interact with a woman in a separate setting, they are more likely to have sexual words on their minds, she said. They are also more likely to remember the woman's physical appearance, and sit closer to her -- for instance, at a job interview.

Taken together, the research suggests that viewing certain images is not appropriate in the workplace, Fiske said.

"I'm not advocating censorship, but I do think people need to know what settings should discourage the display and possession of these kinds of things," she said.

Both women and men have something to learn from this line of research, Raison said. Women should be aware of how they are perceived when wearing provocative clothing, and men shouldn't let feelings of impersonal sexual longing interfere with their more personal relationships with other women, including female friends. "Many men make foolish choices because of sexual attraction," he said.

"The suggestion might be that there's some hard-wiring there that can interfere with the average man's ability to interact on deeper levels with really hot looking stranger women in bikinis," he said.

Women may also depersonalize men in certain situations, but published research on the subject has not been done, experts say. Evolutionary psychology would theorize that men view women as objects in terms of their youth and apparent fertility, while women might view men as instrumental in terms of their status and resources, Fiske said.

Another avenue to explore would be showing images of men's wives and girlfriends in bikinis, Raison said. He predicts the objectifying effect would not happen in this context.

All About Princeton University • Psychology