LONDON, England (CNN) -- It only takes one injury to end an athlete's career. Anything that impairs an athlete's performance could mean they're no longer good enough for the top flight -- that's why the best athletes need the best treatment if they're to recover from injury. 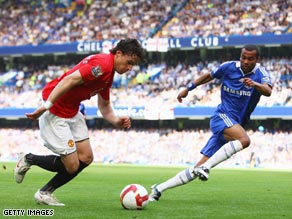 Owen Hargreaves (L) in action before his career was cut short by tendonitis.

Manchester United star and England international footballer Owen Hargreaves is known for his versatility and exceptional work rate, but in 2008 his season was cut short by tendonitis.

Hargreaves, 27, was told he would need surgery on both knees to save his career.

That's when he decided to travel to the small mountain ski village of Vail, Colorado, to meet the "knee whisperer" -- Dr Richard Steadman.

Steadman became fascinated with the way the knee functions and how it can be injured during his university days playing American football.

Now known as "Doctor Steady," Steadman is knee specialist to the stars, counting Real Madrid ace Ruud van Nistelrooy, American football sensation Bruce Smith, and even the King of Spain among his clients.

"I just think he understands the athletes, the significance of the injuries and he's able to deal with the personalities that go along with these injuries," Hargreaves told CNN.

Steadman works with a team of 75 doctors who have together repaired some 16,000 knees.

He has developed pioneering knee treatments, including "micro-fracturing," which involves making a small hole in a patient's bone to draw out marrow blood, allowing the patient's own stem cells and growth factors to make new cartilage.

Dr. Steadman says the secret to healing athletes is letting them do what they do best. "I became convinced early in my career that mobility was important and immobility was a bad thing.

"I was one of the first ones to say, 'I don't think we'll use casts, we'll work on braces, we'll try to get motion back'," he told CNN.

Owen Hargreaves has about a month left of rehab in Vail. His days follow a strict routine: Wake up, rehab, eat lunch, rehab, eat dinner and rest.

"It's been frustrating at times," says Hargreaves.

"I don't really watch our games because as an athlete, and being so competitive, it's hard to watch when you normally would be out there."

Steadman says Hargreaves will return to football next season better than ever, adding that athletes often build inner strength from overcoming what could be a career-ending injuries.

Hargreaves shares that view. "I'm going to come back stronger and hopefully add a couple of years onto my career," he said.

For others the road to recovery can be slower. British middleweight boxer Michael Watson almost died after collapsing at the end of his 1991 title fight with Chris Eubank.

"I took a punch, everything went blank and I woke up in a bed. I thought I was dreaming," Watson told CNN.

Watson spent the next 40 days in a coma and had to undergo six brain operations. Neurosurgeon Peter Hamlyn, who operated on Watson, told CNN, "He was as close to death as I think it's possible to go, and survive. And he stayed there for longer than anyone I've ever known."

It was thought that Watson would never walk again, but after years of slow recovery, he was able to enter the 2003 London Marathon, completing it over six days. "His [recovery] is by far the most remarkable I've ever seen," said Hamlyn.

There's now a close bond between Hamlyn and Watson, and Steadman's patients are similarly grateful for their recoveries.

The hallway of Steadman's clinic is lined with the signed shirts of his former patients; the number 10 Manchester United shirt signed by Ruud van Nistelrooy reads simply "Thank you for giving back my dream."