LONDON, England -- A severe rabies epidemic has claimed the lives of at least 83 children within three months in Angola's capital, Luanda, the World Health Organization (WHO) has said. 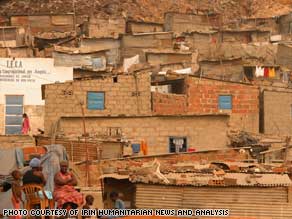 Luanda, which has a large population of stray dogs, also has some of the world's worst slums.

Describing the situation as "very worrying," WHO rabies expert Francois Meslin told CNN: "This is a huge number and could be the tip of the iceberg."

A doctor working at the country's biggest referral hospital Hospital Pediatrico David Bernardino said staff were unable to save any of the children as rabies vaccines had run out.

Some of the children were also brought into the hospital too late to be saved, Luis Bernardino, head of the hospital told UN humanitarian organization IRIN.

He warned that the number of deaths could be much higher.

"The children were brought to our hospital and are the only ones we know of, so the number could be higher," Bernardino told IRIN.

"It is a sad moment for us," he added. "I think it was probably that no one was prepared for such a high case load."

The number of cases has now started declining, however, said Bernardino.

According to Meslin, this could be because the current infected pack of dogs has died.

Angola's capital, where most of the population live in slums, has a large number of stray dogs who are said to have caused the epidemic.

"We have had some sporadic cases in other provincial capitals in the country; we think the virus was brought into Luanda and then spread through the dogs -- Angolans love dogs," Bernardino said.

"When the first 10 deaths were reported in December 2008 we alerted the authorities, but we do not have veterinary services in the city, no kennels [to keep and observe the animals] and vaccinate them," he added.

Another problem contributing to the crisis is that vaccines are too expensive for the average family.

"One dose of vaccine costs about $10 and five of those have to be administered, which makes the total cost of treatment $50 which is more than a month's salary for families in most developing countries," Meslin added.

In 2008 the WHO wrote that rabies, a disease transmitted from animals with infected saliva to humans, is present on nearly every continent of the world but more that 95 per cent of human deaths occur in Asia and Africa.

It can be prevented by vaccination, either prior to exposure or as part of post-exposure treatment. But once symptoms of the disease develop, rabies is fatal.

According to the WHO, rabies can affect the lungs, stomach and central nervous systems. In the critical stage, a victim slips into a coma and death, usually due to breathing failure.

More than 55,000 people die of rabies each year, the WHO wrote, with 30 to 60 per cent of the victims of dog bites being children under the age of 15.

All About Angola • Rabies