LONDON, England -- Scientists in the U.S. are developing a laser gun that could kill millions of mosquitoes in minutes. 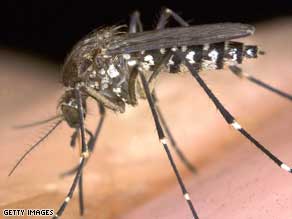 The WHO has reported that around half of the world's population is at risk of malaria.

The laser, which has been dubbed a "weapon of mosquito destruction" fires at mosquitoes once it detects the audio frequency created by the beating of its wings.

The laser beam then destroys the mosquito, burning it on the spot.

Developed by some of the astrophysicists involved in what was known as the "Star Wars" anti-missile programs during the Cold War, the project is meant to prevent the spread of malaria.

Lead scientist on the project, Dr. Jordin Kare, told CNN that the laser would be able to sweep an area and "toast millions of mosquitoes in a few minutes."

Malaria is a life-threatening disease caused by parasites that are transmitted to people from the bites of female mosquitoes.

It is particularly prevalent in tropical and sub-tropical regions of the world and kills an African child every 30 seconds, according to the World Health Organization.

There are an estimated 300 million acute cases of malaria each year globally, resulting in more than one million deaths, the WHO reports.

Responding to questions about any potential harm the laser could pose to the eco-system, Kare said: "There is no such thing as a good mosquito, there's nothing that feeds exclusively on them. No one would miss mosquitoes," he said.

"In any case," he added. "The laser is able to distinguish between mosquitoes that go after people and those that aren't dangerous. What remains to be seen is how precise we can get."

He added that other insects would not be affected by the laser's beam.

Kare said the lasers could be mounted on lamp post-type poles and put around the circumference of villages, to create a kind of "fence" against mosquitoes.

The research was commissioned by Intellectual Ventures, a Washington, U.S.-based company that was founded by Nathan Myhrvold, a former Microsoft Corporation executive.

His previous boss, Bill Gates, who funded the research, asked Myhrvold to look into new ways of combating malaria.