WASHINGTON (CNN) -- Consumers should be skeptical of health and weight-loss claims of the increasingly popular Brazilian fruit, acai, and the free trial offers that ask for their credit card information, a nonprofit health group said Monday. 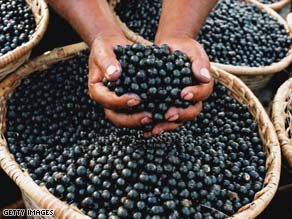 The Center for Science in the Public Interest said companies offering free trials of diet pills made with the acai berries have bilked thousands of consumers using fake celebrity endorsements and blogs to lure customers.

Consumers are asked to provide a credit card to pay shipping and handling charges, but begin almost immediately receiving $80 to $90 monthly charges. Thousands of consumers have had trouble stopping those charges once they canceled the free trial offer.

Acai (pronounced a-sigh-EE) comes in a number of forms including juice, pulp, powder and capsule. The berry has been touted as an antioxidant, anti-inflammatory and an antibacterial. The fruit is said to contain Omega-3 and Omega-6 fatty acids, which are essential to human health.

Claims of weight loss are unfounded, said the CSPI.

"There's no evidence whatsoever to suggest that acai pills will help shed pounds, flatten tummies, cleanse colon, enhance sexual desire, or perform any of the other commonly advertised functions," according to the organization's press release.

"Virtually every berry -- blueberry, strawberry, goji, acai -- are anti-inflammatory and high in antioxidants," Bowden said. "This particular one is exotic. It's found in Brazil. It's been marketed to have more of a magic ingredient. It's been over-hyped and marketed to death. There are claims to curing cancer, curing baldness that is all over the place."

Like most berries, acai has good nutritional qualities, but "there is not a drop of research" that supports marketing claims that it prevents weight gain and facial wrinkles, Bowden said.

Acai juices sell for as much as $40 per bottle.

"The expensive acai berry is triumph of marketing over science, that's the bottom line," Bowden said. "It's not useless, but it's not anything that people are claiming it is."

After a doctor listed acai as a healthy food on the Oprah Winfrey show last year, and a guest on Rachael Ray's cooking show mentioned the fruit, ads popped up directing consumers to sites selling acai weight loss products as if endorsed by the celebrities. Winfrey and Ray have publicly disassociated themselves from those sites.

According to the Better Business Bureau, FWM Laboratories received an F rating, the BBB's worst. Other acai companies with the BBB''s F rating include Advanced Wellness Research, AcaiBurn, FX Supplements and SFL Nutrition.

Keri Gans, dietitian and spokeswoman for the American Dietetic Association, recommends that customers turn to fruits and vegetables at their local produce markets.

"If you're going on the Internet to find them and paying shipping fees, you should go to a market and buy local vegetables and fruits," she said. "It'd be a lot less expensive."

Acai berries could be part of a well-balanced diet of different fruits, vegetables and whole grains. Gans said consumers should be skeptical whenever any one food seems too good to be true and should not rely on one "miracle food" to boost health.

"If [people] hope to find answers in one food for longevity, I would say they're mistaken," she said.