Want to live longer? Cut back on red meat

Burger lovers beware: People who eat red meat every day have a higher risk of dying over a 10-year period -- mostly because of cardiovascular disease or cancer --than their peers who eat less red or processed meat, according to a new study of about half a million people. 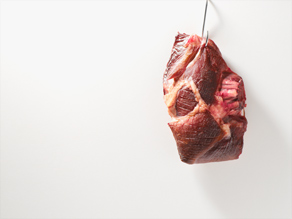 "This is the biggest and highest quality study like this," says Barry M. Popkin, Ph.D., from the University of North Carolina, who wrote an editorial accompanying the study, which was published Monday in Archives of Internal Medicine. "They collected the diet data very carefully, and it's saying to people, 'You don't have to eat red meat every day.' "

In the study, a research team led by Rashmi Sinha, Ph.D., from the National Cancer Institute in Rockville, Maryland, looked at more than 500,000 people who were aged 50 to 71 when they enrolled in the National Institutes of Health-AARP Diet and Health study.

Over a 10-year period, people who ate the most red meat every day (about 62.5 grams per 1,000 calories per day, equivalent to a quarter-pound burger or small steak per day) had about a 30 percent greater risk of dying compared with those who consumed the least amount of red meat (a median of 9.8 grams per 1,000 calories per day). The excess mortality was mostly the result of cardiovascular disease and cancer. Health.com: No-brainer guide to healthy portions

The red meat in the study included all types of beef and pork, including bacon, cold cuts, ham, hamburgers, hot dogs, and steak, as well as meat in pizza, chili, lasagna, and stew.

In addition, those who ate the largest amounts of processed meat (defined as about 22.6 grams per 1,000 calories per day of bacon, red-meat sausage, poultry sausage, cold cuts, ham, regular hot dogs, and low-fat hot dogs) also had a slightly higher mortality risk than those who consumed the least.

In contrast, people who ate the most white meat seemed to have a slightly lower mortality risk during the study than those who consumed the least amount of white meat. White meat included chicken, turkey, and fish, as well as some poultry products and canned tuna.

Watch more on the link between red meat and higher mortality »

The American Institute of Cancer Research recommends that people consume less than 18 ounces of red meat per week (the equivalent of a child-size fast-food hamburger per day) to reduce the risk for cancer, and the American Heart Association recommends limiting saturated fats to less than 7 percent of total daily calories. (Animal products, such as meat and dairy, tend to be higher in saturated fat.) The United States Department of Agriculture food pyramid recommends two to three daily servings of protein, which can include lean meat, but can also come from plant sources. Health.com: Meat and dairy: How much should you eat for heart health?

"It is important that people understand that they do not need to give up eating red meat, but should pay a little closer attention to how much they eat," says Lona Sandon, R.D., a spokesperson for the American Dietetic Association and an assistant professor at UT Southwestern in Dallas, Texas. "Many people, particularly women, come up short on the nutrients that red meat has to offer."

Red meat contains protein, iron, zinc, selenium, and B vitamins that are important to the body and help prevent nutrient deficiency, says Sandon.

Sandon recommends that people replace high-fat red and processed meats with protein-rich foods such as poultry or fish, beans, eggs, and low-fat dairy. Also, she adds, filling half a plate with vegetables and a quarter with meat will help keep portions in control. Health.com: Fiber, starch, fats, and serving sizes: Eat right advice for your diet

"What we need to keep in mind about this study is that it does not prove that red meat causes increased death; it simply shows an association," she says. "The study relied on people's recall of what they typically eat, which does not always match what they actually consumed."

Popkin says that consuming meat in moderation is important for our diet, as well as the health of the planet. Americans consume around four times more meat and dairy than the rest of the world, which may contribute to a number of global concerns, including an increased demand and price for meat, increased greenhouse gases, and a rise in disease, he says.

"All we have to do is eat red meat more infrequently and cut out the sausages and hot dogs," he says. "If we cut ours down just a little bit, it would be all it took because we consume so much."