LONDON, England -- Painfully hot, they make your eyes water, your heart race and can turn your face embarrassingly red. 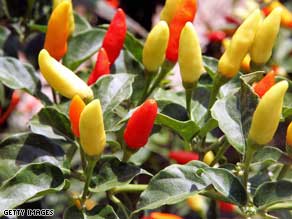 Chilies have been used for many millenia both for their medicinal benefits and exciting flavor.

Once only a staple of cuisine from far flung regions of the world, chilies can now be found in almost any dish around the globe.

Last week an Indian woman wolfed down 51 "ghost chilies," -- the world's spiciest -- in two minutes and smeared the seeds on her eyes for an entry into the Guinness World Records.

Anandita Dutta Tamuly, 28, achieved the bizarre and fiery undertaking in the Indian north-eastern state of Assam.

She was cheered on by British chef Gordon Ramsay, who also attempted a bite of the hot stuff before begging for water. A single seed can cause watering eyes, as well as a burning sensation in the mouth that can last up to five hours.

A chili's spiciness is measured in Scoville units; the number of times a chili extract must be diluted in water in order for it to lose its heat.

Chilies have formed part of the diet in the Americas since approximately 7,500 BC and owe most of their fame to their sometimes unbearably spicy flavor.

But they have also long been recognized for their health benefits. Scientific research --and legend-- have attributed health wonders to chilies over the years.

Diego Alvarez Chanca, a physician on explorer Christopher Columbus' second voyage to the West Indies in 1493, first wrote about the pepper's medicinal effects back in 1494.

Below we look at effects eating chilies has on the body.

Other than for its flavor-enhancing qualities, chili is, oddly enough, used to fight the summer heat.

As the chili causes extreme sweating and blood rushing to the face, it cools the body down when the sweat evaporates, making it useful for combating heat.

These same heat inducing properties are said to have a cumulative effect and over time are believed to alleviate pain when used in treatments for anything from arthritis and psoriasis to shingles and severe burns.

The substances that give chili peppers their intensity when eaten or applied on the skin are called capsaicinoids.

When consumed, capsaicinoids connect with pain receptors in the mouth and throat that are normally responsible for sensing heat.

Once activated by the capsaicinoids, these receptors send a message to the brain that the person has consumed something hot.

The brain responds to the burning sensation by raising the heart rate, increasing perspiration and releasing endorphins, called the body's "natural painkillers" and "happy hormones."

Chilies have long been associated with soothing the digestive system, by acting as stomach cleansers. According to the UK Food Guide, chili helps to settle stomach upset and encourages the production of good digestive acid.

Chili aficionados believe the fruits can also induce weight loss because the substance that makes them "hot" speed up the body's metabolism.

However, one study by the American Institute of Cancer Research performed in Mexico showed in 2003 that a high consumption of chilies (approximately nine to 25 jalapeno peppers per day) is in fact associated with stomach cancer.

Red chilies contain high amounts of carotene and vitamin C. It is said that chilies contain more vitamin C than citrus fruits. Chili peppers are also a good source of vitamin B6 and are very high in potassium, magnesium and iron, giving them a reputation for naturally boosting the body's immune system.

Heart and other cardiovascular effects

A 2006 study published in the British Journal of Nutrition showed that after adding chili to the diet, bad cholesterol, that can often lead to heart problems, took a longer time to develop into heart diseases.