(CNN) -- As he strained, crunched and lifted weights, the muscle panels surfaced from Jason Dinant's stomach. Faintly at first, they emerged: one, two, three and four -- not yet a six-pack. 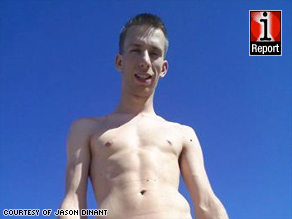 "In the first three months, I saw such a fast improvement, now I'm worried about plateauing," said Jason Dinant.

"My bottom two abs haven't come in yet," he said.

Since January, Dinant, an iReporter, has tried to get six-pack abs in time for his 10-year high school reunion in June.

Dinant, a Las Vegas, Nevada, resident, is one of the three iReport contributors being followed by CNNhealth as they strive to meet diet and fitness goals they set at the beginning of the year. iReport.com: See the journey to change

Dinant wanted to whip his beanpole figure into muscular shape. He also wanted to display a healthier physique for his blog called "Naked Boy News," where he stands shirtless to give what he calls "the naked truth about today's news."

And now the 27-year-old has another motivation.

Dinant will be a guest, riding in a chariot-style car for an "ab-veil" on June 28 for the Lesbian, Gay, Bisexual and Transgender Pride March in New York. His car is to be accompanied by rows of shirtless men who also have six-packs.

Dinant was invited because, the Naked Boy News is "a very popular act," said Maurice Michaane, director of the event. "People in the Northeast know him."

With the parade only two months away, Dinant said: "Now I'm in high drive. There's no cheating on the diet."

To get in shape, he works out four to five days a week, performing a combination of core exercises, dumbbell curls and pull-ups. He jogs, does cardio exercises and works with a fitness trainer. To avoid looking like "a toothpick with abs," he started lifting weights.

With a stringent diet and hours at the gym, the 6-foot-tall Dinant shrank from 160 to 143 pounds.

Losing weight is normal with all the exercising and dieting, said Robert Dothard, a personal trainer based in Atlanta, Georgia.

"You can't see a six-pack through fat," Dinant said. "Belly fat is the enemy. People reveal their ab muscles, but the nutrition and exercise are also formula for weight loss."

The key is to eat in increments, but it's difficult for people with traditional, 9-to-5 jobs to eat something every two hours to maintain their weight, he said. Body builders try to offset the weight loss by consuming protein powders and supplements, Dothard said.

"It's hard to eat that much protein," Dinant said. "I started drinking this protein shake so I can get in all the calories and protein."

Compared with just four months ago, the "man boobies" and the extra layer of flab around his midsection have been lost, Dinant said. And there's an even bigger benefit.

"I'm awake more. I'm alert more and I have more energy," he said. "I just feel better. My whole body has become healthier and better."

While pleased with the results, Dinant worried that with two-thirds of a six-pack, his body will begin to plateau.

"Plateaus are really a mental thing," Dothard said. "When that happens, people start going back to their own habits. So they end up cheating and binging."

If the body doesn't respond to the workout anymore, more difficult exercises should be adopted.

"Jason has to do something different or harder to maintain results to keep on the track that he's on," Dothard said. "It can be frustrating, especially when he is still working out and the body is not responding to the same thing. People work out 30-45 days and get tremendous results, then it slows down or stops. Nothing's wrong. The body is adjusting to what you're doing."