(CNN) -- As Hayden Henshaw was being rushed to the doctor's office after becoming ill, his father heard that his son's classmates had been struck with the deadly swine flu virus like the one sweeping through Mexico. 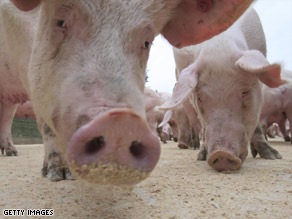 Patrick Henshaw called his wife immediately to have Hayden checked for it. Later, they received the bad news.

Hayden had become the third confirmed case of swine flu at his Texas high school. It is a virus that has killed 68 people in Mexico and infected at least eight people in the United States.

Health officials arrived at the Henshaws' house Friday and drew blood from the whole family, then told them to stay inside and away from the public, Henshaw told CNN.

The whole family is quarantined indefinitely, according to CNN-affiliate KABB. Henshaw said his family was shocked when they got the news about their son.

"Stunned. My wife was having a panic attack," Henshaw told the affiliate.

U.S. health officials have expressed concern about U.S. cases of a swine flu virus that has similar characteristics to the fatal virus in Mexico.

More than 1,000 people have fallen ill in Mexico City in a short period of time, U.S. health experts said.

"This situation has been developing quickly," Richard Besser, acting director of the Atlanta, Georgia-based Centers for Disease Control and Prevention (CDC), said Friday. "This is something we are worried about."

Besser said all of the eight U.S. patients have recovered.

New York health officials said Friday they were testing about 75 students at a school in New York City for swine flu after the students exhibited flu-like symptoms this week.

A team of state health department doctors and staff went to the St. Francis Preparatory School in the borough of Queens on Thursday after the students reported cough, fever, sore throat, aches and pains.

Test results are expected as early as Saturday.

Swine flu is caused by a virus similar to a type of flu virus that infects people every year but is a strain typically found only in pigs -- or in people who have direct contact with pigs.

There have, however, been cases of person-to-person transmission of swine flu, the CDC said.