Pandemic: What would happen next?

(CNN) -- The world hasn't seen a pandemic in 41 years, when the "Hong Kong" flu crossed the globe and killed about one million people worldwide. If swine flu reaches pandemic levels, what would happen next? 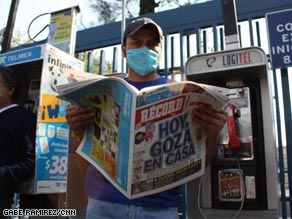 A man wearing a protective mask reads a newspaper outside a hospital in Mexico City.

Recurrent outbreaks of avian Influenza and the outbreak of SARS in 2003 rang alarm bells as potential pandemics.

Strictly speaking, avian influenza and SARS did not become pandemics because they were too good at killing their hosts.

"For a sustained pandemic, it needs to be able to maintain human-to-human contact without killing its host off," he said.

"Swine flu is already a man-to-man disease, which makes it much more difficult to manage, and swine flu appears much more infectious than SARS."

But the World Health Organization cautions that it cannot say whether it will cause a pandemic. According to epidemiologists and health experts, here's what the world might see if there is another pandemic, based on past experience:

The disease would skip from city to city over an 18- to 24-month period, infecting more than a third of the population. World Health Organization officials believe that as many as 1.5 billion people around the globe would seek medical care, and nearly 30 million would seek hospitalization. Based on the last pandemic and current world population, as many as 7 million people could die, epidemiologists said.

"Hospitals will become overcrowded; schools will close; businesses will close; airports will be empty," Lo said.

"Business will become very bad as people avoid as much social contact as possible," Yuen added.

Health facilities will become overrun with patients, and there would be less-than-adequate staffing as medical health professionals fall ill themselves, experts say.

"We saw cases in SARS where people who should have gone to the hospital for things like cancer treatment didn't go, and that resulted in higher deaths," Lo said.

The very young and very old will probably be the most susceptible to the illness.

Experts caution that much is still unknown about the current swine flu virus and its severity and that it is too early to say whether it will lead to a pandemic. Right now, the focus is on finding answers and containing the spread.