(CNN) -- The World Health Organization has raised its pandemic alert level in response to the outbreak of swine flu that originated in Mexico. 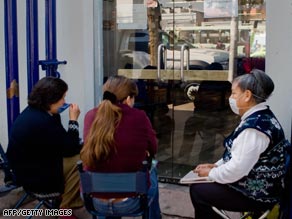 The move to a level four alert indicates the world body has determined the virus is capable of significant human-to-human transmission.

Dr. Keiji Fukuda, WHO assistant director-general, said the move did not mean a pandemic was inevitable. He added the agency would focus efforts on mitigating, rather than containing, the virus.

Fukuda said it was too early to predict whether there will be a mild or serious pandemic.

More cases were confirmed Monday in the United States, Canada and Europe. The WHO said the U.S. has confirmed 47 cases, Mexico 26, Canada six and Spain one. Two more were confirmed in Scotland.

In Mexico the virus is believed to be responsible for at least 149 deaths -- though most of those have not yet been confirmed -- while almost 2,000 have been hospitalized.

Some health experts fear the disease could become a pandemic, partly because it has killed young, healthy adults in Mexico.

Watch how the disease is emptying churches and soccer grounds »

"I would like the take the opportunity to express our condolences to those families who have lost a loved one to the epidemic," Cordova Villalobos said Monday evening. But while he described the situation as an emergency, "it's not a disaster situation."

Mexico closed all schools until at least May 6 to help curb the spread of swine flu, officials announced Monday.

Watch how China is preparing for a possible outbreak »

A U.S. federal official confirmed the U.S. figure -- up from 20 with all the new cases coming from a New York school where eight cases were previously confirmed.

Dr. Richard Besser, acting director of the Centers for Disease Control and Prevention in Atlanta, Georgia, said only one of the U.S. cases has been hospitalized, and all have recovered.

Besser said it was too early to say how severe how future cases could be. "I fear that as we continue to look for cases, we are going to see cases in this country that are more severe -- individuals who are hospitalized," he said. "And I would not be surprised if we see deaths in this country."

The European Union's health commissioner Monday urged people "to avoid non-essential travel to the areas which are reported to be in the center of the clusters" of a swine flu outbreak.

Andorra Vassiliou's latest comments soften an earlier statement urging people "to avoid traveling to both Mexico and the United States due to concerns about swine flu." iReport.com: Do you think we should be worried about swine flu?

The EU issued a statement clarifying that Vassiliou's remarks were her personal comments and that travel advisories can be issued only by member states and not by the EU itself.

The first case of swine flu in Europe was confirmed Monday in Spain. Health minister Trinidad Jimenez said a 23-year-old man who returned from studying in Mexico last Wednesday tested positive for the virus at a hospital in the country's southeast.

At least 16 more cases are being treated as possible swine flu, Jimenez told a news conference. Earlier, Jimenez met with health officials to discuss Spain's response to the crisis.

"We do not have an emergency situation in Spain, but we are working to prevent any possible development, and we are taking action in accord with the World Health Organization," she said.

Spain's Ministry of Health has urged travelers recently returned from Mexico and the U.S. to be on the lookout for symptoms of the virus, including fever, coughing and respiratory problems.

U.N. Secretary-General Ban Ki-moon said: "We are concerned that this virus could cause a new influenza pandemic. It could be mild, in its effects, or potentially be severe. We do not yet know which way it will go. But we are concerned that, in Mexico, most of those who died were young and healthy adults.

Dr. Besser, of the CDC, said the EU warning was "not warranted."

U.S. President Barack Obama said Monday that the outbreak was a "cause for concern" but not a "cause for alarm."

He said the federal government was "closely monitoring" emerging cases and had declared a public health emergency as a "precautionary tool" to ensure the availability of adequate resources to combat the spread of the virus.

Israel and New Zealand, where 22 students and three teachers were quarantined after returning for a three-week trip to Mexico, are also investigating suspected cases. South Korea says it will test travelers arriving from the U.S.

Swine flu is a contagious respiratory disease that usually affects pigs. It is caused by a type-A influenza virus. The current strain is a new variation of an H1N1 virus, which is a mix of human and animal versions.

When the flu spreads person-to-person, instead of from animals to humans, it can continue to mutate, making it harder to treat or fight off because people have no natural immunity.

The symptoms are similar to common flu. They include fever, lethargy, lack of appetite, coughing, runny nose, sore throat, nausea, vomiting and diarrhea.

The virus spreads when an infected person coughs or sneezes around another person. People can become infected by touching something with the flu virus on it and then touching their mouth, nose or eyes.