(CNN) -- The World Health Organization has called it a "public health emergency of international concern." 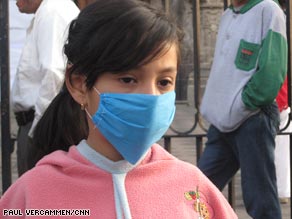 A girl in Mexico City wears a mask outside a church on Sunday.

Seemingly out of nowhere, the swine flu virus has spread from person to person in Mexico and the United States, triggering global concerns as governments scramble to find ways to prevent further outbreak.

Q. What is swine flu?

A. Swine influenza, or flu, is a contagious respiratory disease that affects pigs. It is caused by a type-A influenza virus. Outbreaks in pigs occur year-round.

The most common version is H1N1. The current strain is a new variation of an H1N1 virus, which is a mix of human and animal versions.

A. While the virus causes regular outbreaks in pigs, people usually are not struck by swine flu. However, there have been instances of the virus spreading to people -- and then from one person to another. The only difference is, says the CDC, transmission in the past did not spread beyond three people -- as it has done this time.

Q. What is behind the spread of the virus this time?

A. Researchers do not know yet know. People usually get swine flu from infected pigs. For example, farmers handling infected pigs can contract the virus. However, some human cases have occurred without contact with pigs or places they inhabited.

Q. What are the symptoms of swine flu?

A. The symptoms are similar to the common flu. They include fever, lethargy, lack of appetite, coughing, runny nose, sore throat, nausea, vomiting and diarrhea.

Q. How does the virus spread?

A. The virus spreads the same way the seasonal flu does. When an infected person coughs or sneezes around another person, the latter is put at risk. People can become infected by touching something with the flu virus on it and then touching their mouth, nose or eyes. An infected person can pass the virus to another before any symptoms even develop.

Q. Why is this spread troubling?

A. Scientists are concerned whenever a new virus is able to jump from an animal to a person -- and then spread from person to person. When the flu spreads person to person, it can continue to mutate, making it harder to treat or fight off.

The World Health Organization has said the current outbreak has "pandemic potential," and has urged governments to take precautions to prevent its spread. If the virus continues to mutate, drug makers won't be able to come up with vaccines fast enough.

Q. Can swine flu be fatal?

A. Just like the regular flu, swine flu worsens pre-existing medical conditions in people. So people with already compromised immune systems can die after contracting it.

A. Yes, common seasonal flu kills 250,000 to 500,000 people worldwide every year. But what worries officials is that a new strain of the flu virus can spread fast because people do not have natural immunity and vaccines can take months to develop.

Q. Have there been swine flu outbreaks in the past?

A. From 2005 to January 2009, 12 human cases of swine flu were detected in the United States, without deaths occurring, the CDC said. In September 1988, a healthy 32-year-old pregnant woman in Wisconsin was hospitalized for pneumonia after being infected with swine flu and died a week later. And in 1976, a swine flu outbreak in Fort Dix, New Jersey, caused more than 200 illnesses and one death.

Q. What does the World Health Organization mean when it says swine flu has "pandemic potential"?

A. If the virus spreads over a wide geographic area and affects a large segment of the population, it is upgraded from an "epidemic" to a "pandemic."

Q. How deadly have pandemics been in the past?

Q. How can one keep from getting swine flu?

A. There are no vaccines available. But several everyday steps can help prevent the spread of germs: Washing hands frequently; avoiding close contact with people who are sick; and avoiding touching surfaces that might be contaminated.

Watch how much of Mexico City has come to a halt »

Q. Are there medicines to treat swine flu?

A. Yes, the CDC recommends using anti-viral drugs. They keep the virus from reproducing inside the body. And in an infected person, the drugs make the illness milder.

Q. Can one contract swine flu from eating or preparing pork?

A. No. Pork and other pig-derived products, if properly handled and cooked, do not transmit swine flu. The flu virus is killed by cooking temperatures of 160°F (70°C).