Among the swine flu mysteries: Why only deaths in Mexico?

(CNN) -- It's a confounding question on the lips of disease detectives: Why have the only deaths from the swine flu outbreak happened in Mexico? 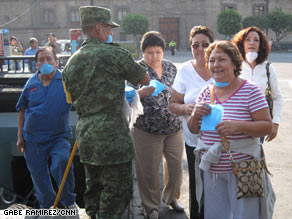 Investigators also want to know why the disease has killed young adults, who should have the greatest resistance.

"They're good questions that we're asking, too," said Von Roebuck, spokesman for the U.S. Centers for Disease Control and Prevention. "We're still young in this investigation and we're still trying to understand exposure in this country as well as exposure in Mexico."

By contrast, the United States has had 64 confirmed cases, five hospitalizations and no deaths.

"The difference in seriousness between the known U.S. cases and the Mexican cases is the question that everyone wants to answer," said Maryn McKenna, author of "Beating Back the Devil," a 2004 book on the history of the CDC, and the forthcoming "Superbug," about drug-resistant staph.

There are no hard answers, but a consensus is emerging: The disease in Mexico has likely been around longer and infected more people than investigators can confirm.

"Do we really know all of the cases that existed in Mexico or is this just the tip of the iceberg?" asked Louis Sullivan, a physician and former head of Health and Human Services under President George H.W. Bush.

McKenna said it's possible "there is much more flu in Mexico than we know because it hasn't been counted. That would mean that there are mild cases there as well, but that you have to get to a certain number of cases before, statistically, you start to see the very serious ones, and the U.S. hasn't had that many cases yet."

It's a view shared on the streets of Mexico City, the hardest-hit area.

"My intuition is that as the medical community starts looking around and at what has happened they may find that swine flu was there and they just didn't catch it," said Ana Maria Salazar, a radio talk show host and political blogger who lives in Mexico City. "Nobody was looking for this. We were all looking for this in Asia."

Influenza is basically an extreme upper respiratory infection, and, by itself, is rarely fatal. But it can lead to deadly complications, such as pneumonia. About 36,000 Americans die from flu complications every year.

Swine flu is caused by a virus similar to the type of flu virus that, in various forms, infects people every year, but is a strain typically found only in pigs -- or in people who have direct contact with pigs.

A couple of factors could be causing the greater death toll in Mexico, said Howard Markel, a physician and director of the Center for the History of Medicine at the University of Michigan.

Also, he said, the people who have died in Mexico could have had what he called "another co-factor," such as taking medicine or having pre-existing infections that would make them more vulnerable. It's also possible, he said, that those who died had an underlying genetic predisposition or condition.

Markel noted that "flu was classically called a crowding disease in the 19th century."

Disease investigators also are concerned by the fact that the outbreak has killed people in the prime of their lives, when they should have peak resistance.

"It is certainly a red flag," Markel said.

Health authorities have pointed out that this swine flu strain has never been seen. That may have a lot to do with the deaths, Markel said.

"It's a fairly novel strain," he said, "and the deaths could be from healthy people who have a healthy, robust immune system that overreacts." iReport.com: Share your concerns

That could result in a "cytokine storm" in which the body secretes too many chemicals as it tries to kill offending microorganisms.

The hyper-response can lead to accumulation of fluid in the lungs and a condition called "acute respiratory distress syndrome."

Julio Frenk, former health minister of Mexico and now dean of the Harvard School of Public Health, holds an opposing view: The disease could be killing people who are not healthy because of their living conditions.

"There could also be some elements in the host," he said. "These are poor people. Maybe their immune response is not as efficient. So we're going to have to just keep trying to understand why this difference and whether that continues as the epidemic unfolds."

He also noted that antiviral medications need to be taken within hours of the onset of symptoms, but people in Mexico may not have sought treatment immediately, if at all.

As the outbreak continues to unfold, so will the investigation.

"We're making every effort to truly understand this virus," said CDC's Roebuck. "But some of the reasons for what's happening we may never figure out."