LA GLORIA, Mexico (CNN) -- Tucked away in this small mountain village, off a dusty road flanked by pig farms, is where the earliest case of swine flu -- a virus spreading globally -- was confirmed. 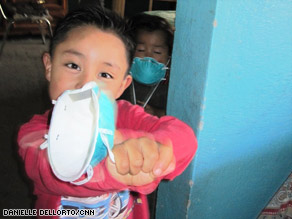 His family lives in the 3,000-population village of La Gloria in the state of Veracruz, where a flu outbreak was reported on April 2. State officials arrived and took samples from dozens of people.

His mother blamed the virus on a huge pig farm in the neighborhood. Officials have conducted tests at the farm owned by U.S. company Smithfield Foods, and those tests came back negative.

The deadly outbreak in Mexico prompted authorities to order about 35,000 public venues in Mexico City to close or serve only take-out meals as health officials tried to contain the virus. iReport.com: Are you worried about swine flu?

Officials on Friday closed schools in the city and Monday extended that order nationwide until at least May 6.

"I'm pretty nervous of this whole virus thing," Berta Hernandez said as she touched up her eyeliner inside a packed and humid subway car in Mexico City. She did not dare lift her surgical mask to put on lip gloss.

Some, like China and Russia, banned pork imports from the United States and Mexico, even though the World Health Organization said the disease "has not been shown to be transmissible to people through eating properly handled and prepared pork (pig meat) or other products derived from pigs." Several others, such as Japan and Indonesia, used thermographic devices to test the temperature of passengers arriving from Mexico.

President Obama said the outbreak is a cause for concern, not for alarm. The government urged travelers to avoid nonessential travel to Mexico. iReport.com: "Regular life" in Mexico with masks

The U.S. Food and Drug Administration issued emergency authorization for the use of two of the most common antiviral drugs, Tamiflu and Relenza. The authorization allows the distribution of the drugs by a broader range of health-care workers and loosens age limits for their use.

In Mexico City, however, there is a shortage of such medication. It also became impossible to find protective surgical masks, which the government had handed out to one out of every five residents.

Worried citizens continue to flood in night and day at hospitals, only to be turned around by armed guards.

But there is no vaccine for the new disease, and little natural immunity, an expert said.

Meanwhile, Mexico's largest city saw the the government close universities, postpone sporting events and cancel church services in an effort to try to stem the spread of the virus.

"I don't think it's feasible or advisable to shut down the city," said Jose Luis Suarez, a newspaper vendor. "People would try and get out somehow, and that would make a bad situation worse."