Meet the boy believed to be 'patient zero'

LA GLORIA, Mexico (CNN) -- Tucked away in this small mountain village in Mexico, off a dusty road flanked by pig farms, is where the earliest case of swine flu -- a virus spreading globally -- was confirmed. 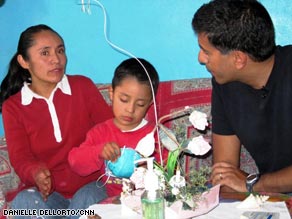 His family lives in the 3,000-population village of La Gloria in the state of Veracruz, where a flu outbreak was reported on April 2. State officials arrived and tested dozens of people.

His mother blamed a huge pig farm in the neighborhood for the virus.

Officials have conducted tests at the farm owned by U.S. company Smithfield Foods, and those tests came back negative.

Swine influenza, or flu, is a contagious respiratory disease that affects pigs. When the flu spreads person to person, instead of from animals to humans, it can continue to mutate, making it harder to treat or fight, because people have no natural immunity. Symptoms include fever, runny nose, sore throat, nausea, vomiting and diarrhea.

Common seasonal flu kills 250,000 to 500,000 people every year worldwide, far more than the current outbreak of swine flu. But there is no vaccine for this new disease, and little natural immunity, an expert said.

Meanwhile, in hard-hit Mexico City, the government closed universities, postponed sporting events, asked restaurants to serve only take-out food, and canceled church services in an effort to try to stem the spread of the virus.

Worried residents continue to flood in night and day at hospitals, only to be turned away by armed guards.

Two of the most common antiviral drugs, Tamiflu and Relenza -- which are effective against swine flu -- are in short supply in Mexico's capital. It also has become impossible to find protective surgical masks, which the government had handed out to one out of every five residents.