(CNN) -- In 2004, a bullet ripped away Connie Culp's nose, cheeks and upper jaw. Metal fragments sprayed into her skull and stripped her face away, leaving nothing except for her eyes, her chin and forehead. 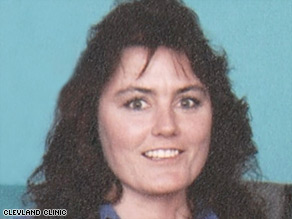 Culp, an Ohio mother of two, lost the mid-portion of her face after a gunshot wound in September 2004.

Without her nose, she could not smell. She breathed through a tracheostomy -- a surgical opening in her neck. Without lips, she could barely speak.

But Tuesday, when Culp, 46, the first recipient of a face transplant in the United States, stepped in front of the cameras at a news conference, she was whole.

In a soft voice, the Ohio mother of two repeatedly thanked the medical staff and the deceased donor whose nose, upper lip, cheekbones are now hers.

"I want to focus on the donor family that allowed me to have this Christmas present," she told reporters gathered at the Cleveland Clinic, where her surgery took place.

Watch Culp talk about the surgery »

In December, Culp underwent a 22-hour transplant surgery. Although the hospital announced the facial transplant at that time, the patient had remained anonymous until the news conference.

During the surgery, tissue from a deceased donor's face was shaped and fitted into position. Multiple layers of tissue, bone, muscle and blood vessels, nerve grafts and each artery and vein were connected. Culp received a nose, lower eyelids and upper lips, as doctors filled in the missing components of her face.

Culp could not yet move her facial muscles to form a smile, but she laughed.

"Connie can now enjoy her food," said Dr. Maria Siemionow, who led the transplant operation. "She eats hamburgers and enjoys her pizzas, she's drinking coffee from the cup."

Her new face allows her to "blend with society."

"As you can see we have now a healthy person and happy person," Siemionow said. "She has reduced dramatically her pain and also she's able to walk on the street without being called names."

Since the operation, doctors say Culp's new face has developed more movement. The new facial nerves are growing slowly, about an inch a month.

See before and after photos of Connie Culp »

"While Connie can do several things now that she was unable to do in the past, as time goes on more and more of the facial nerves will grow," said Dr. Frank Papay, chairman of the Dermatology and Plastic Surgery Institute at the Cleveland Clinic. "She will become more animated."

For years, Culp lived "in tremendous pain, chronic pain, over the entire time," said Siemionow, director of plastic face transplant surgery research and head of microsurgery training at the hospital.

Culp told a local television station in a 2008 interview that she had been shot in the face from just eight feet away in an attempted murder-suicide by her husband.

In 2005, Culp came to the Cleveland Clinic for treatment. After 30 surgical procedures, none had restored her basic functions.

"The last resort and the last option was to consider face transplantation," said Siemionow. Transplant recipients have to take immunosuppressing, anti-rejection drugs for the rest of their life.

After the hospital's surgeons, ethical committee members, psychiatry and psychology specialists met with Culp, they decided "that Connie is the right patient," Siemionow said.

Doctors involved in Culp's treatment said the surgery was not about aesthetics, but to restore Culp's basic abilities.

"We are actually overwhelmed by how great she's doing functionally," Siemionow said. "And I'm re-emphasizing that this is all about functional outcome. Someone who couldn't breathe through the nose, who couldn't eat solid foods, didn't have a palate or not able to drink from a cup. ... So if she can do all these functions that are taken for granted on a daily basis, this is amazing."

Although there is a risk Culp's body could still reject the transplant, the doctors said they have not seen such signs.

Some critics say face transplants are unnecessary, because they are risky procedures involving a lifetime of immunosuppressants, that do not save a person's life, but improve an individual's appearance. Previous face transplants performed in Europe and Asia generated controversy. A Chinese man whose face was disfigured in a bear attack died of unknown causes two years after receiving the face transplant.

The fact that Culp regained some of her basic functions highlights that "this is not cosmetic surgery in any sense of the word," said Dr. Eric Kodish, the professor and chairman of the Cleveland Clinic's Department of Bioethics. "We remain convinced about the ethical justification for the face transplant in this and potentially in other cases in the future."

Ultimately, the face transplant affords an individual's "right to decide what kind of life they want to live." Many with facial disfigurements are called names, can't go out in public or wear masks to hide their face, said Siemionow.

In Culp's case, it was a matter of restoring basic physical abilities.

"If you can breathe through your nose in the spring in Cleveland, isn't that amazing?" said Siemionow.

Culp will require a few more cosmetic procedures, for example to remove excess skin from her face.

Culp read a statement and did not take questions. She told reporters in the news conference that she had been shot and said, "I don't want to go into it."

Then she asked the public to have empathy for people with facial disfigurements.

"When somebody don't look as pretty as you do, don't judge them," she said. "You don't know what might happen to you. Don't judge the people who don't look the same way as you do. You never know when it may be taken away from you."