How to avoid the most common of cancers: Skin cancer

WASHINGTON (CNN) -- Stephanie White is a skin cancer expert. At 41, she's had all three types of the condition: basal cell carcinoma, squamous cell carcinoma and melanoma. 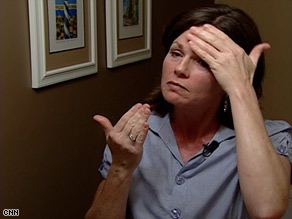 Stephanie White, 41, caught her melanoma early because she was familiar with the blemishes on her skin.

Growing up in Jacksonville, Florida, Stephanie was always in the sun.

"We spent a lot of time at the beach. My mom did always use sunscreen," White said. "And as sunscreens got better, I always did use them, because I couldn't be outside without burning, and it was more about not getting burnt."

But burn she did, and as she got older, Stephanie began to see changes in her skin. Considering her fair skin and light hair, her dermatologist knew she was a candidate for skin cancer and began looking for possible problems.

Over the years, a crusty spot developed on her leg and then a reddish lesion on her back; a pink spot on her arm turned out to be melanoma, the most dangerous of skin cancers. Her most recent bout was a spot on her leg that was removed.

Now living in southern Maryland, Stephanie -- who loves being outdoors -- never goes out with some form of protection against the sun. She even arms herself with SPF 70 sunblock and a big hat just to walk her dog, Lexie.

According to the American Cancer Society, skin cancer is the most common of all cancer types. The group says that more than 1 million Americans are diagnosed with some form of skin cancer every year, more than breast, prostate, lung, colon, uterine, ovarian and pancreatic cancers combined. And the number of cases is on the rise.

Although people with fair skin, freckles and moles are more prone to skin cancer, it can show up anywhere and on anyone.

Divided into two groups, basal cell and squamous cell carcinomas are the most common. Found mainly on parts of the body often exposed to the sun, such as the head and neck, they occur more often in people who spend, or have spent, time in the sun. Although they're not fatal, doctors say, it's still important to have these cancers treated, because they can invade nearby tissues, causing scarring and disfigurement.

Melanomas are different. They can appear anywhere on the body but are more likely to form on the trunk and legs, where most people get burned. In people with dark skin, melanomas are more common on the soles of feet and palms of hands, where pigment is lighter.

Melanomas are usually characterized by dark uneven textures that grow fairly quickly. They are treatable in their early stages. However, when a melanoma goes undetected, it can spread to other parts of the body, making it more difficult to treat.

Most skin cancers are caused by too much exposure to ultraviolet rays. Although it's nearly impossible to avoid being out in the sun, there are steps you can take to reduce your chances of developing it.

No matter what time of year it is, always put on sunblock when you go outside.

"Use at least an SPF 15 sunblock every time you step outside. It's almost like you wake up in the morning, brush your teeth, comb your hair, put some sunscreen on," recommended Dr. George Verghese, a dermatologist and director of the Mid-Atlantic Skin Surgery Institute in Waldorf, Maryland. "And make sure it has both an UVA and a UVB blocker."

Verghese says UVA rays penetrate deeper and break down the skin's cells, leading to wrinkles and blemishes; UVB rays are stronger, damage the skin's layers by burning and are mostly responsible for skin cancers.

The American Cancer Society advises when choosing a sunscreen to look at the label: The higher the SPF (sun protection factor) number, the more protection you get. But, the group warns, sunblock does not give you total protection.

Furthermore, the sun protection factor number indicates protection against UVB rays only. Sunscreen products that say they protect against UVA and UVB radiation are the best, but according to the Skin Cancer Foundation, "at this time there is no standard system for measuring protection from UVA rays."

When slathering on sunscreen, once is not enough.

"Every two to four hours, you want to re-apply your sunscreen, with 1 to 2 ounces" to stay safe, Verghese said. He recommends using a waterproof (not just water-resistant) sunscreen if you'll be swimming and looking at the expiration date on a bottle of sunblock to make sure it's still effective.

Not only can certain sunglasses protect your eyes from developing cataracts later in life, they can keep you from developing melanoma of the eye and skin cancer around the temples. Look for glasses that offer UVA and UVB radiation protection of 99 to 100 percent. Anything less, and the protection diminishes.

Wear clothes that cover your skin, and never go to the beach without a coverup. Hiking outside? Dark colors usually provide more protection, and tightly woven fabrics are better when fighting the sun's rays than loosely woven clothing. Today, quite a few companies make sun protection clothing; they are tightly knit and have a special coating to help absorb UV rays. Verghese says they seem to work.

Be aware of the time of day

Try to avoid the strongest sun. Verghese advises to stay out of the sun between noon and 3 p.m., especially if you are at the beach. If you must be outside, look for shade, and stay covered.

Know how to tan

The National Institutes of Health strongly warns people not to use tanning beds on a regular basis, if at all. That's because the lamps in the beds give out UVA, and frequently UVB, rays in concentrated doses.

Verghese says tanning beds are part of the reason many young people are now being diagnosed with skin cancer.

"It almost accelerates the total UV radiation," he said. "So people manifest these skin cancers at a much earlier age."

If you think you are too pasty for the beach, try some of the new self-tanning products, most of which also have SPF (and no longer leave you orange like a pumpkin).

Do a skin check

Know your body and your ABCD's (asymmetry, borders, color and diameter). Examine your skin once a month, and if you see something abnormal, talk to your doctor about it immediately.

Early detection is key to surviving skin cancer. Stephanie White knows firsthand. She caught her melanoma early because she was familiar with the blemishes on her skin. It's a practice, she'll tell you, that probably saved her life.