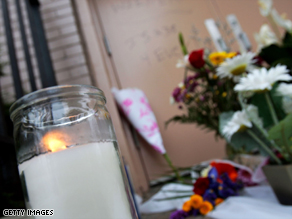 Commonly known as swine flu, the outbreak has sickened 9,830 people and caused at least 79 deaths -- mostly in Mexico, the organization said. The actual number of people affected may be higher, as it takes time for national governments to confirm cases and report them to the global body.

In the United States, at least 5,469 cases of swine flu have been reported, according to the latest figures from the Centers for Disease Control and Prevention. The CDC has linked six deaths to the outbreak; health officials in New York have connected a seventh death to the disease.

Concern about the disease deepened Tuesday, even as authorities have said that the outbreak may prove to be less severe than first suspected.

A 44-year-old man died Tuesday in suburban St. Louis, Missouri, according to John Shelton of the St. Louis County Health Department. The man, whose name was not released, had been hospitalized for the past few weeks. He had visited Mexico and tests showed he had swine flu, Shelton said. However, the county medical examiner will determine the cause of the man's death.

In New York, medical investigators were looking into the death of a baby boy whose mother brought him to Elmhurst Hospital. The 16-month-old arrived at the hospital with a fever around 9:30 p.m. Monday and died about 50 minutes later, said said Dario Centorcelli, a hospital spokesman. The cause of death was not immediately known. The baby's 3-year-old sister and 1-year-old cousin were treated and released, Centorcelli said.

Watch more about the death »

If confirmed by the Centers for Disease Control and Prevention, Wiener's death would be the seventh linked to swine flu in the United States. The CDC has confirmed three in Texas, two in Arizona and one in Washington state.

Wiener's school is among a handful in New York City that temporarily closed at the recommendation of the city's Health Department.

Frieden said Sunday that "with the virus spreading widely," closing affected schools "will make little difference in transmission throughout New York City, but we hope will help slow transmission within the individual school communities."

The flu strain, which originated in Mexico, killed dozens of people there, causing U.S. officials to worry that it could take a similar toll after spreading across the border.

So far, however, it has acted similar to typical seasonal influenza -- which usually can be treated successfully but can be deadly among the very old, very young and people with pre-existing health problems.

CNN's Kara Devlin and Mary Snow contributed to this report.