If you're middle-aged or older, a 10-minute walking test can give you and your doctor a pretty clear picture of whether you are at higher risk of dying during the next few years compared with other people your age, according to a large new analysis of data showing that cardiorespiratory fitness is intimately linked with the risk of dying of just about any cause. 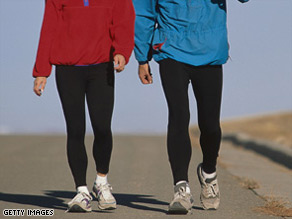 People who move from couch-potato status to moderate fitness will see the most substantial survival benefit.

However, you probably won't get this exercise test unless you ask for it.

The exercise stress test --or, in medical parlance, the graded exercise test --measures your cardiorespiratory fitness, or how well your heart, lungs, muscles, and blood vessels work together to use oxygen and produce energy. There are several ways to do the test, but it basically involves walking or running on a treadmill at progressively steeper inclines or faster speeds under medical supervision. Health.com: The fastest fitness plan we've seen

It has been known for decades that cardiorespiratory fitness is a key factor in mortality risk, with more-fit people surviving longer than the less-fit, said Dr. Timothy Church, director of preventive medicine research at Pennington Biomedical Research Center in Baton Rouge, Louisiana. "Fitness is just simply as powerful a risk factor as there is," he said.

But primary-care doctors don't include it in a patient's workup along with blood pressure, cholesterol levels, and so on, he said.

"It's expensive, it's not easy to do, it requires special equipment, and physicians these days don't even have time to talk about exercise in general, let alone do exercise tests on everybody," Church said.

But they probably should, according to the authors of a major review of the medical literature on fitness and mortality risk published this week in Journal of the American Medical Association. Health.com: Knowing your mother's health history can lower your risks

Satoru Kodama, of the University of Tsukuba Institute of Clinical Medicine in Ibaraki, Japan, and colleagues looked at 33 studies dating back to 1980, including a total analysis of about 200,000 people, and came up with an important number that could encourage doctors to use cardiorespiratory fitness testing in their patients.

That number, in metabolic equivalent units (METs)-- which basically measure how much work your body can do -- is 7.9. This fitness level roughly equates to a 50-year-old man being able to walk "continuously" at four miles an hour during the test, or a woman of the same age walking at three miles an hour. Health.com: How to work out if exercise triggers your asthma

Mortality risk in general dropped by 13 percent for every additional MET of fitness, while cardiovascular risk dropped 15 percent, said Lee W. Jones, an associate professor in the department of surgery at Duke University who studies fitness and cancer mortality. "That's major stuff."

Although people probably think that cholesterol levels, weight, and blood pressure tell them everything they need to know about their fitness, he said, the influence of your heart and lung function is actually separate from these factors -- although becoming more fit will cut your cholesterol levels and reduce your blood pressure.

People who move from couch-potato status to moderate fitness --something they can accomplish by walking 30 minutes a day five days a week -- will see the most substantial survival benefit from increased cardiorespiratory fitness, said Church. Health.com: How exercise may boost your mood

But everybody could stand to get a little fitter, and the fitter you are, the greater the benefit, said Jones. "People always ask me how much exercise they should be doing," he said. "My answer is always the same: more."